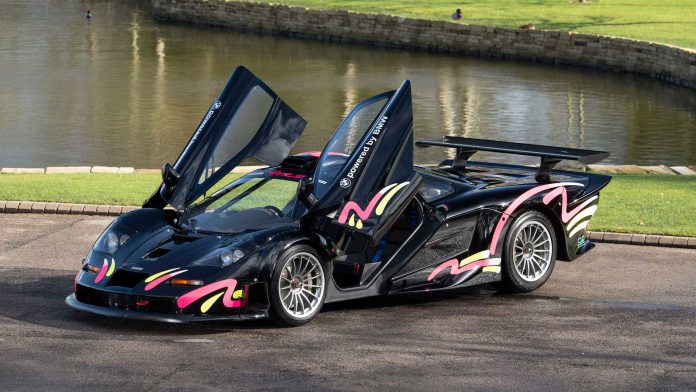 Tom Hartley Jnr has managed to secure the sale of the only road-legal McLaren F1 GTR Longtail. It is one of ten cars and was used as the prototype/development car by McLaren.

Tom Hartley Jnr hasn’t revealed the asking price for this F1 GTR Longtail. The price demanded by the McLaren F1 has gone through the roof in recent years.

This particular McLaren F1 GTR Longtail was sold to Japan after McLaren had finished with development. It raced in the 1997 Suzuka 1000 km where it ran in Lark Livery. It finished 9th in that race.

Between 1995 and 2005, chassis GTR-19R raced extensively in Japanese GT and endurance events. It was then sold to the United States before making its way back to the UK.

It was road legalised by specialists Levante alongside Gordon Murray design. Despite the fact that it wears a numberplate, videos have proven that it still sounds every inch a race car.

Tom Hartley Jnr offers the McLaren F1 GTR Longtail with a huge spares package including all parts to return it back to full race spec.

A previous owner also commissioned a dedicated book by Gordon Murray Design, documenting the history of this particular car and its road spec conversion.

As with all McLaren F1 GTR Longtail, chassis 19R features a 6.0 litre V12 engine. This example likely puts down about 600 hp and 651 Nm of torque. Weight is probably a little heavier than its 915 kg rating as a pure racer.