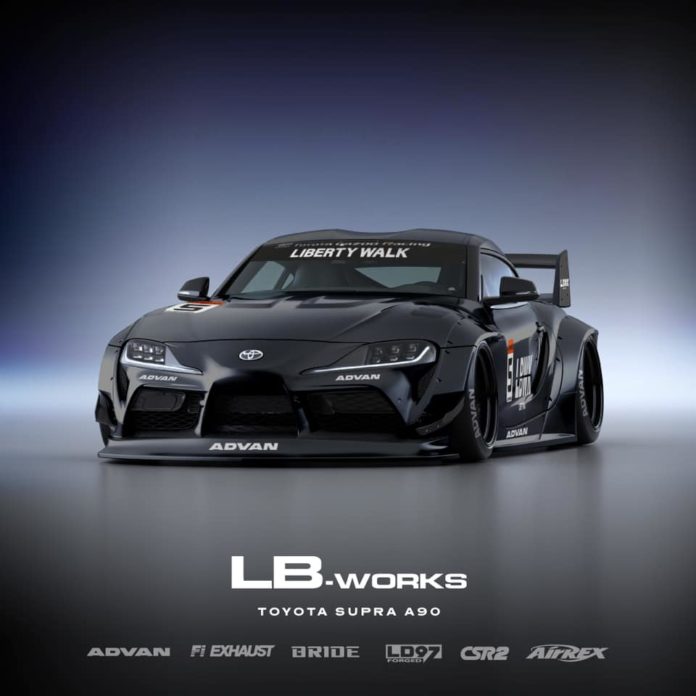 Tuning firm’s don’t come any bigger than Liberty Walk. Japanese sports cars don’t get more famous than the Toyota Supra. A match made in heaven? Perhaps, if your cup of tea is overblown styling; a’la Fast & Furious.

The Liberty Walk Toyota Supra recently arrived. As you would expect, the main feature is the wide-bodykit. Liberty Walk’s trademark bolt on fenders dominate the package. Modifications are made all around.

Photos of the car were released earlier this week by the Japanese tuning giant. They show a low front splitter, bolted onto the standard looking air intakes. The bonnet receives fender vents and two deep bonnet vents.

The fender flares are clear at the front and rear wheel arches. Modifications to the side skirt bring the sides closer to the ground. At the rear, a huge rear spoiler carries the Liberty Walk logo. The rear bumper continues the side skirts, adding rear wheel vents. The new exhaust pipes finish the look.

The Liberty Walk Toyota Supra kit comes in carbon fibre or fibre reinforced plastic. Liberty Walk lists the prices as $19,030 and $17,930 respectively. Of course, if you are after a single piece for your project, Liberty Walk sell the individual components seperately.

Underneath, we think Liberty Walk may have left things standard. In Asia and Europe, the Supra ships with a choice of either the turbocharged 2.0-litre inline-four or a turbocharged 3.0-litre inline-six engine. Power ranges from 194 to 255 hp or 335 to 382 hp.