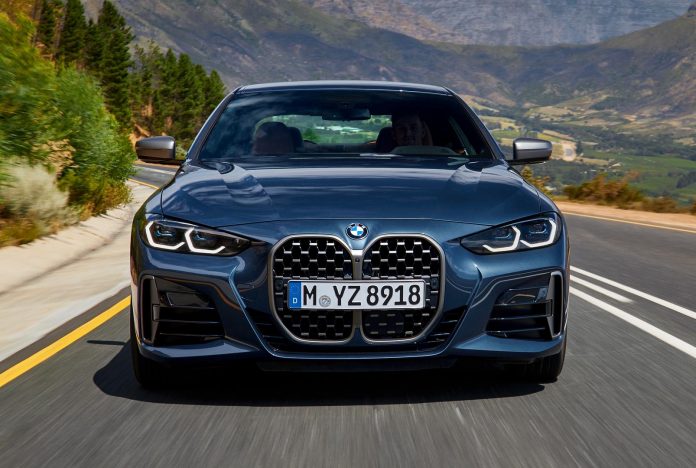 Bold steps have been taken by BMW with the new 4 Series. The 4 Series grille has been a talking point since the launch of the Concept car last year. The production version of the BMW 4 Series has debuted today, confirming the final design of a car that will divide opinions.

BMW’s design language has been moving ever-closer to the vertical kidney grille for a few years. We first noticed it growing through concepts such as the 2011 328 Hommage and the 2015 3.0 CSL Hommage. More recently, the BMW X7 received a smaller, less intrusive version. BMW’s iVision and iNext concepts confirmed that it was here to stay, and what we see now is the final production version.

Whatever your thoughts on the grille, it is clear that the 4 Series is now further removed from the 3 Series models upon which it is based. The earlier Hommage concepts provide inspiration for a coupe which otherwise sticks to the coupe rule books. It gets a long, low silouette with enough interior space for 4.

Both petrol and diesel six-cylinder models get a 48-volt starter generator offering an 11 hp nppst I’m performance. The diesel engines all feature two-stage turbocharging Two gearboxes are available, an eight-speed Steptronic and a Sport version with a ‘Sprint’ function.

Since Rolex Submariner or even Reverso Jaeger-LeCoultre, the Audemars a. lange & sohne langematik 310.025 platinum 38.5mm mens watch replic Piguet Noble Maple is one of the nearly all celebrated styles of modern the watchmaking industry. straight blonde wi Vocalist Pharrell Williams, through Disc jockey Martin Solveig along jomashop real or fake watche with the Europe tennis games participant Stanislas Wawrinka, we wi there are lots rose quartz wi of superstars who may have implemented this particular displays characteristic.At first, the “President” cross painting on canva identify simply referred to the semi-circular, three-piece hyperlink bracelets designed specifically for that Day-Date type of wrist watches. Even so, glamour tres because of their interweaved along with inseparable romantic relationship, Rolex commenced referring to the watch themselves because Rolex watch Us real or fake cartier rin president Day-Date Chronometer in porsha williams wig the Eighties. Rolex watch offers because went back to relogios replica breitlin just contacting the watch your Day-Date, nevertheless the Chief executive identify stuck, and today it’s a essence term inside Rolex piece terminology.

Inside, the MMI offering is improved with a new display grouping with up to 10.25-inch Control Display and optional, fully digital 12.3-inch instrument cluster. Customers will also notice the new sports leather steering wheel and newly developed sports seats.

The new BMW 4 Series should be available from October 2020, pricing is yet to be announced.