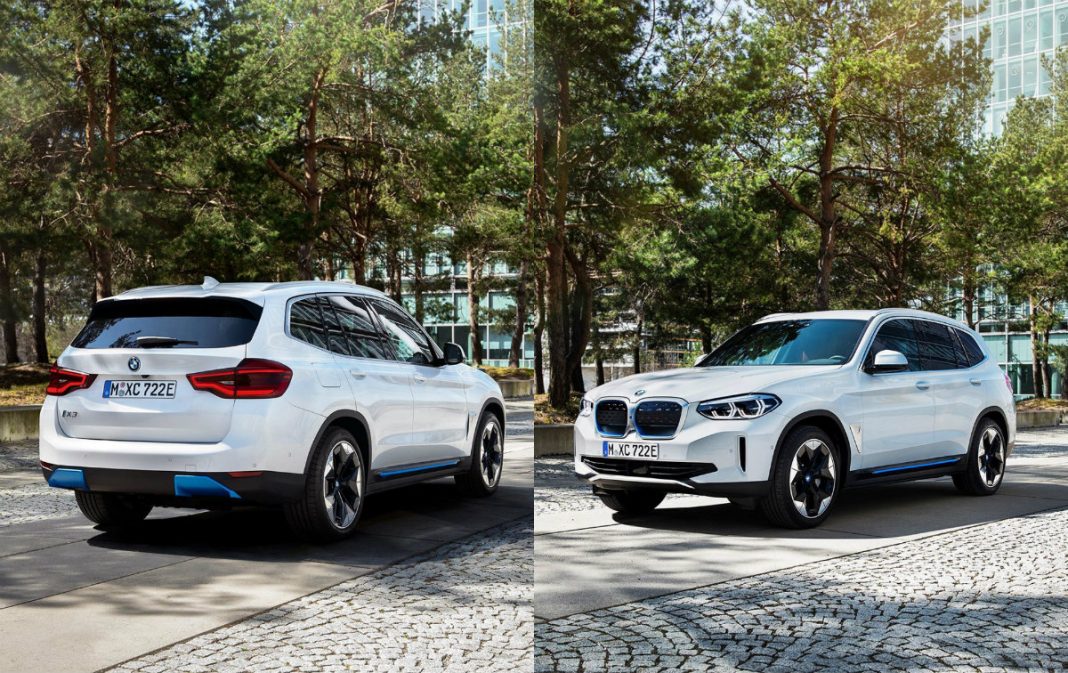 Pictures of the upcoming BMW iX3 have surfaced online. The full-electric SUV is set to go head-to-head with the established Jaguar I-Pace and Mercedes-Benz EQC. The exact launch date remains to be seen as the coronavirus pandemic messes with the schedules of car manufacturers around the globe. Until then the leaked give a first glimpse at the first full-electric BMW SUV.

The photos leaked without any additional info but rumours suggest the iX3 will have a battery capacity of over 70 kWh and a range of approximately 400 km. By comparison, an I-Pace promises 470 km of range and the EQC 445 km.

The photos show an X3 with a number of key changes. BMW’s kidney grille has been covered with smaller air intakes made possible through the reduced cooling requirements of the electric drivetrain. The front bumper gets verticle air intakes and brake cooling ducts.

The wheel design looks bespoke to the BMW iX3. It likely carries an aerodynamic advantage over a more conventional version. Blue accents feature lower down the iX3 with blue trim elements placed where the exhaust might normally be found.

We have already seen a concept version of the BMW iX3 at the Beijing Motor Show 2018 which is fairly similar to the concept unveiled today. Following the unveiling of the Beijing concept car, BMW moved to trademark iX1 through to iX9, indicating that it was considering an entire range of electric models.

BMW was the first German manufacturer to launch electric and plug-in hybrid mass market models nearly 8 years ago. The 2013 i3 and 2014 i8 sported a very bold design which did not meet all expectations. The new iX3 is much more conventional in design and a close relative to the X3 both in design as well as in concept. SUVs remain hot so it will be interesting to see how well the iX3 fares compared to its combustion counterparts.