Launching to synthetic sounds and a futuristic light show at the Kintex Center west of the Korean capital Seoul, the Genesis GV80 is the first SUV model from Hyundai’s upscale subsidiary Genesis. It is due to celebrate its European debut at the Geneva Motor Show in March – and it comes across as a success at first glance.

After all, it has all the ingredients required in the premium SUV category: a sophisticated vehicle architecture that is based on a rear-wheel drive concept; a luxurious interior – and a body that offers room for up to seven passengers (even if few customers will ever use the third row).

The typical rear-wheel drive proportions were already visible on the first sketches that were sent out two weeks ago; they are highlighted with a light signature with narrow, double light strips up front and in the rear. “These two lines will always shape the design of Genesis,” said the Hyundai Group’s chief designer Luc Donckerwolke at the presentation.

The wheel sizes up to 22 inches underscore the sophisticated appearance of the GV80; there is an unusual range of colors and materials both outside and inside, ranging from classic to modern – and certainly outshining the competition.

Hyundai’s head of research and development, Albert Biermann of M GmbH fame, made sure the GV80 meets the elevated demands of sporty drivers. Under the hood, the GV80 sports a 278-hp 3.0-liter six-cylinder diesel engine, and there will be a 370-hp 3.3-liter V6 petrol engine as well. Entry-level models are likely to get a four-cylinder turbo. The GV80 comes with rear and all-wheel drive, an automatic transmission is standard. The relatively light body is largely made from thermoformed high-strength steels, doors and hoods are executed in aluminium. 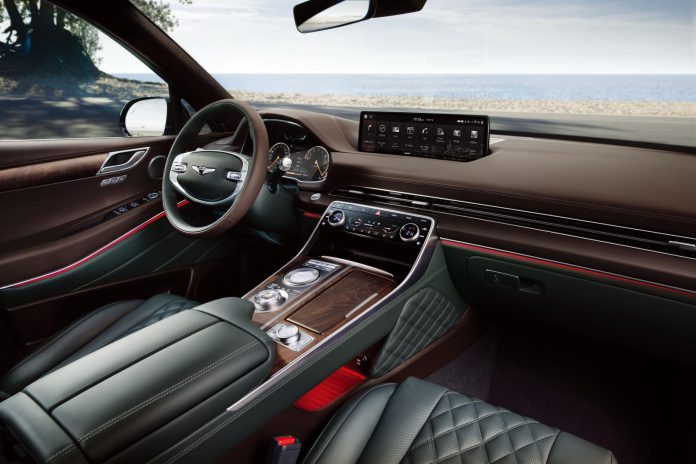 The interior is characterized by a futuristic two-spoke steering wheel, a classic instrumentation, an ultra-wide 14.5-inch central screen and a touch-sensitive surface that can recognize handwriting, making it easy to enter commands and destinations.

Augmented reality functions help finding your lane, and a new generation of counter-sound technology will cut unwanted noise sharply. The driver’s seat – another world first – is equipped with seven air cushions. A camera system scans the road surface and informs the electronic chassis, which prepares accordingly.

Other technology highlights include a cruise control system that analyzes the owner’s driving style and can emulate it when driving autonomously. It is another world first that documents that the Hyundai Group no longer sees itself as a follower but as a pioneer of new developments.

The Group’s more entry-level brands, Hyundai and Kia, have begun to set themselves apart from other international mass producers. With Genesis, it’s an even more ambitious game. And the Genesis GV80 emphasizes that Korea is clearly aiming at the German premium brands – and on track to reach beyond them.