There is probably nothing more fascinating to the automotive connaisseur than those one-offs built by the factory and designated to the private tracks and garages of highly affluent owners. Some of them are never seen by the public. But this year, Rolls-Royce gives us a glimpse of one: Here’s the Sweptail, a unique two-door coupe unveiled at the Concorso d’Eleganza on Lake Como.

The design was jointly developed with the customer – a “connaisseur of Rolls-Royces” who “was inspired by many of his favourite cars from the early 20th Century, as well as many classic and modern yachts,” as the company reveals.

Indeed, the Sweptail reminds the observer of a yacht: It is painted in classic blue, and it is fitted with many wooden elements inside – including a massive hat shelf. Of course, there is a cooler – for “a bottle of the client’s favourite vintage champagne,” as the press release gushes. There’s room for two attaché cases, too.

The design of he Sweptail is both classic and minimalist – with a massive aluminum grille, a front end encompassed by a metal frame, and a panoramic roof that tapers in strongly towards the rear. The dashboard is more futuristic than any other Rolls-Royce’s to date.

The company won’t disclose the price or the future whereabouts of the car, but it says that the designers “engaged with the client in a wonderfully intellectual journey” that stretched over “a number of years.” The rest of us must hope that this beautiful car won’t disappear, but that it will be seen at many classic car events in the future. 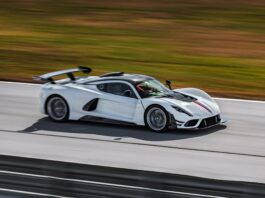 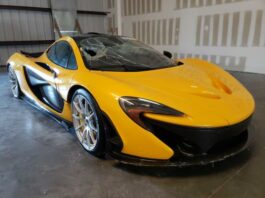