Unveiled at Frankfurt to the stunned masses, the Bugatti Vision Gran Turismo dropped jaws and snapped necks unlike any other car at the show. Not satisfied with the car’s looks however, designer Alexander Imnadze has decided to make the Vision Gran Turismo even more insane with a complete visual transformation.

Rather than creating a car to preview the styling of the upcoming Bugatti Chiron like the French marque itself has done with the concept, Imnadze drew on inspiration from a number of classic Bugatti models. Most notably, the car presented, dubbed the Type 57 GT, takes design cues from the Type 57SC Atlantic, Type 57 Tank, Type 35 as well as the Bugatti Veyron.

The finished result is one which features modern aerodynamic components like the massive rear wing alongside more classical elements like the taillights, exposed riveting and classically designed wheels. 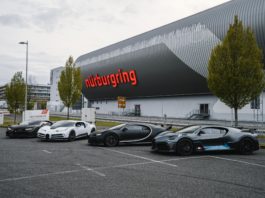