While it may have only been revealed a couple of weeks ago, the stunning McLaren MSO 12C Concept recently made its first public appearance in where else but Monaco! Recently, we brought you an image of the MSO 12C Concept at Monaco courtesy of Raphael Belly Photography.

Now a hair raising video has emerged showing the McLaren MSO 12C Concept being hooked up and craned over a small fence to sit nicely outside the Hotel de Paris in the heart of Monaco. However, because this is Monaco where money is not an object and where perfection is considered normal, we aren’t all that surprised by the efforts the crew went to to crane the car into place! Nevertheless, watching a priceless British supercar concept dangling metres above the ground is quite unnerving!

As a reminder, there are a number of bespoke features including a revised bonnet, front wing louvres, rear wing vents, a unique Airbrake and a new roof featuring an integrated snorkel channelling air to the engine that make up the MSO 12C. These revisions are all crafted in lightweight carbon fibre. Titanium wheel bolts, along with oil and water filler caps, shed further weight from the already light 12C whilst making the whole car look a lot more purposeful.

The interior gains more carbon fibre upgrades, clearly the theme of this car, in the form of body color switch packs and bezels. These are complemented by a new carbon fibre instrument cluster with integrated shift lights to make this 12C feel more like an F1 car than any other! The keen-eyed amongst you will also notice that the light weight wheels have been diamond cut in a new design. 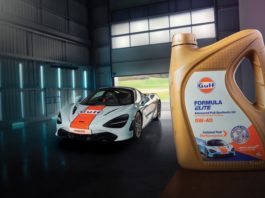