It won’t just be available for the single make racing series though. Technical specifications of the Mercedes-Benz CLA 45 AMG racing car will vary depending on what competition they’re participating in. However, it’s been confirmed that the car will be available in both front wheel drive and all-wheel drive variations just like the road variant depending on what each racing series specifies.

New features include a new front apron, rear apron, flared wings and side sill panels. All of these have been made from lightweight carbon fiber reinforced plastic. Additionally, the Mercedes-Benz CLA 45 AMG Racing Series Concept Car is rolling on a set of slick racing tires and features a massive rear wing for added downforce. For further details on the Mercedes-Benz CLA 45 AMG Racing Series Concept take a look at our earlier article. 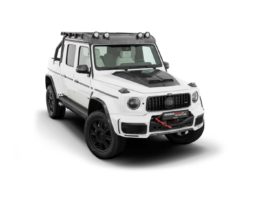