Last week we showed you a brief video of Evo Magazine testing the Hennessey Venom GT Spyder while in attendance at the tuning specialists world record breaking acceleration run, and finally the complete video of Evo’s test has been released and boy oh boy, has it been worth the wait.

As we already know, the Venom GT and its Spyder variant, is the fastest accelerating car on the planet thanks to its impressive twin-turbo V8 engine pumping out 1244hp and its extremely low curb weight of just 1244kg resulting in a perfect 1hp per kg power-to-weight ratio.

The video starts with Evo’s Richard Meaden talking to company CEO and founder John Hennessey, before Meaden takes the car out on bumpy public roads to test out the car at regular, everyday speeds of just 40mph.

And even though Meaden doesn’t get the opportunity to absolutely pin the throttle on the Venom GT Spyder for any extended period of time, it’s very interesting to see that such a car is capable of being driven as slowly as a regular hatchback. 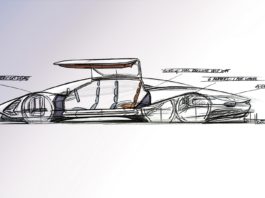