Aldo Maria Sica from IED Torino recently forwarded us a set of renderings for the Pagani Huayra Roadster! The Huayra Roadster isn’t due out for a while yet, Pagani have only been producing the Huayra for a few months, yet we’re already excited about the possibilities this car presents us with. The turbo whoosh for one will be epic!

As you can see from the rederings, Aldo accentuated the Huayra‘s belt line by removing the roof. The Italian hypercar now has an altogether more sleek look. One of the key features is the small viewing platform for the engine. The exposed area is a little larger than the coupe version. Between the driver and the engine sits a set of three suitcases, the central one is designed to accommodate the roof.

The roof itself is composed of two rigid uprights joined by a middle section, apparently this flexible middle section is proposed to be produced in carbon fiber. Inside the cockpit, the roof can be stored in the bag. Alternatively, if you don’t want to carry the bags, you could simply fold it up and place it behind the seat. The roof will be attached via two straps placed on the rear bulkhead.

Obviously, it isn’t practical to include gullwing doors on a roadster, therefore, Aldo proposes that the Pagani Huayra Roadster gets scissor door openings. Enjoy the renderings, the first is white with pink reflections flanked by carbon parts painted with opaque burgundy pigments, the second has a soft touch asphalt gray with orange nuances.

Although the renderings look very nice, the shape of the Huayra Roadster should be predetermined by Pagani‘s ultra-strong carbon kevlar monocoque. No doubt the Huayra Roadster will feature the same M158 twelve-cylinder bi-turbo engine with 720hp and 1,000Nm of maximum torque. 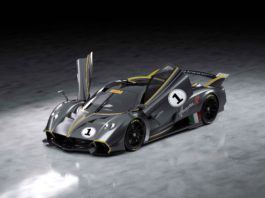