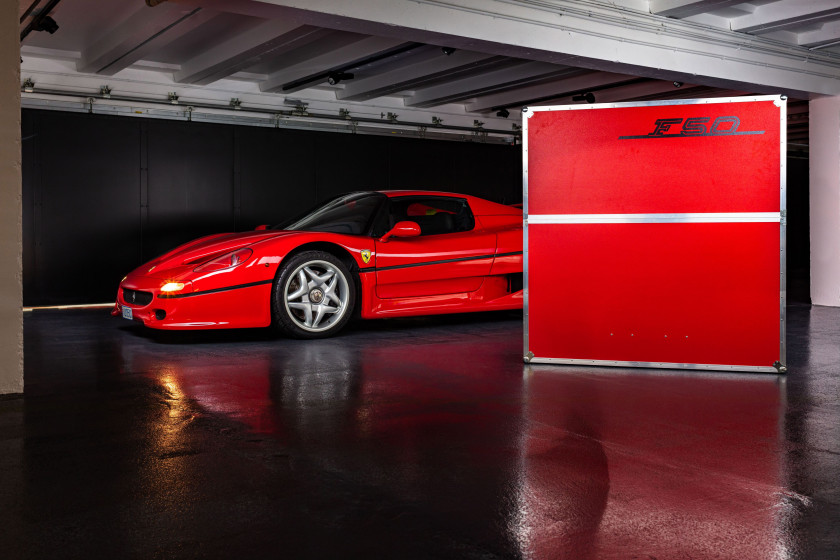 A Ferrari F50 has just been listed by French based auction house Artcurial. 1 of only 349 made in the world, and one of the last V12 powered Ferraris equipped with a manual transmission. This Ferrari F50 was delivered to a client in Monaco on 24th June 1996. The vehicle has had only one owner and has today covered 1318km in faultless condition.

The interior of the Ferrari F50 features two-tone black and red seats, barely used controls, novel dashboard, traditional steering wheel and a metal gated gear lever. The vehicle also comes with its original ‘flight case’ with removable hardtop and fabric soft top parts. Its tool kit is placed under the bonnet together with the original compressor.

The F50 was officially unveiled in 1995 at the Geneva Motor Show. The vehicle was built on a highly rigid carbon-fibre structure, its suspension is similar to the one used in Formula 1 single-seaters and its engine was developed directly from Formula 1.

The F50 is powered by a 4.7 liter naturally aspirated V12 engine. The engine generates a maximum output power of 520bhp, the F50 can attain a top speed of 325km/h. This particular F50 will be up for grabs at the upcoming Artcurial auction on March 18th, 2022.