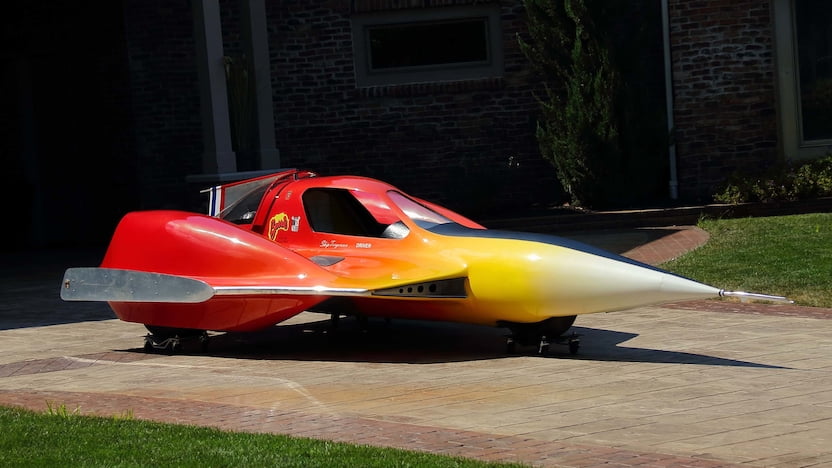 The 1964 Turbosonic Custom Dragster was built, designed and styled at Barris Kustom in California by George Barris, Les Tompkins, Dick Dean and Tom Daniels. The vehicle was co-owned by R.E. Barret.

Stopping the Turbosonic at lower speeds requires an Airheart disc brakes only, whereas when the vehicle is at high speed, a combination of an offset blown parachute and four stabilizer wing flaps are used.

Furthermore, the vehicle features a fireproof cockpit encased in a unitized cross-tube roll bar for protecting the driver, a four-stage solenoid electrical system operates the controls and a two-way radio is used between the driver and his crew for transmitting the dial readings and controlling effects of the car.

The exterior of the vehicle has been finished in Flame Pearl Yellow, Wild Cherry, red, gold and tangerine and features lightweight wings made of fireproof fiberglass. The structure of the car is a combination of monocoque and cross-frame construction with alloy tube frame and the vehicle weighs 850 pounds only.

The Turbospnic will be sold on a bill of sale and postcards and vintage photos will also be included at the Mecum Kissimmee auction in January 2022.