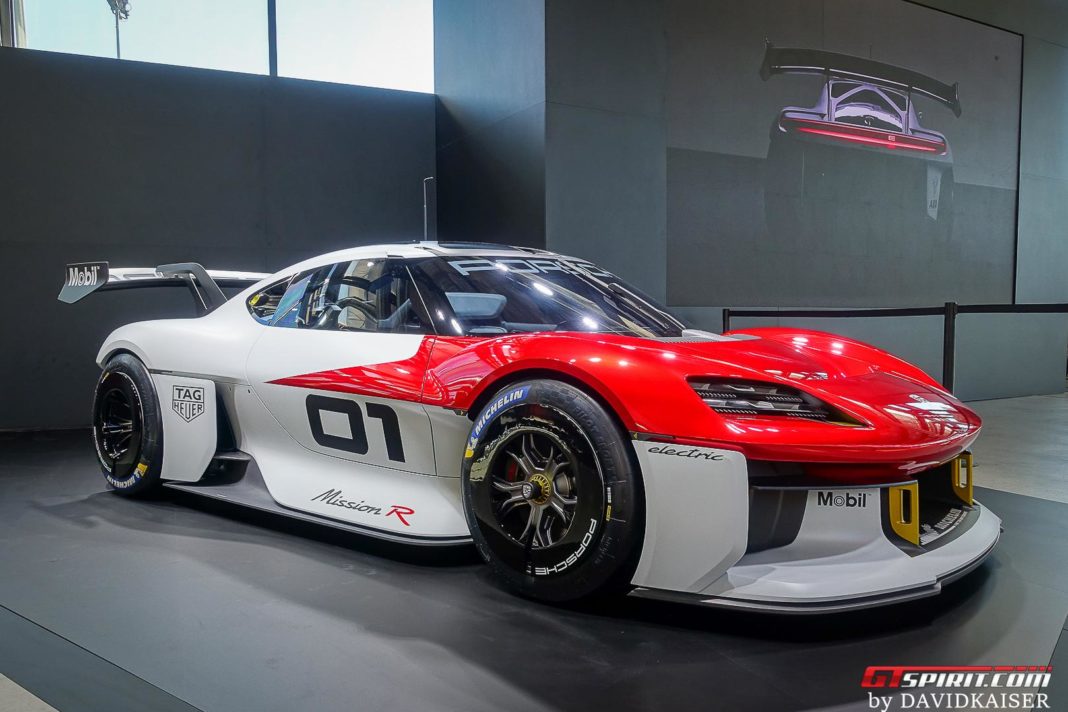 The new Porsche Mission R is the latest all-electric vehicle from Porsche AG. This time however, it comes in form of a GT racing car, effectively previewing the future of Porsche GT racing but also hinting at what the future Porsche GT road cars will utilize as a powertrain. The model features add-ons parts made of natural fibre reinforced plastic (NFRP) which creates 85% less CO2 compared to carbon fibre. The natural fibre material has been used on the front splitter, the side skirts and on the diffuser.

The Mission R has two electric motors at the front and rear, altogether producing 1088hp in Qualifying Mode and 680hp in race mode. 0-100 km/h is achieved in just 2.5s while the top speed is limited to 300km/h. Lap times are at per with those of a GT3 Cup car. The 900v battery can be charged from 5-80% in just 15 minutes thanks to Porsche Turbo Charging.

The electric racing car features a new roll-over protection concept; a cage structure made of carbon fibre reinforced plastic (CFRP) to protect the driver incase of an accident. The carbon cage has been fitted on the roof and its visible from outside through the transparent segments.

The exterior features natural fibre reinforced plastic on the doors, front and rear wings, sill/side panels and on the rear center section of the vehicle. The natural fibres are based on agriculturally produced flax fibres, they are light as carbon fibre and deliver stiffness with a low weight of less than 10%.

The carbon cage was named ‘Exoskeleton’ by the engineers who designed it, the cage combines high protection potential for the driver with low weight and features some transparent surfaces as well as a removable escape hatch for the driver based on FIA requirements for racing vehicles.

The vehicle has been equipped with advanced Porsche Active Aerodynamics (PAA) which can adapt to its characteristics optimally to what the driver is doing on the track and a Drag Reduction System (DRS) consisting of three louvres in the air intakes on each side and an adjustable two-section spoiler.

The Mission R has been fitted with 18 inch magnessium Cup centre lock wheels , the wheels are flow-optimised and consists of smooth carbon aeroblades and milled five twin spokes. The wheels have been moiunted on Michelin tyres measuring 30/68 on the front axle and 31/71 on the rear axle.

The model features a brake-by-wire braking system with a control unit to control the interaction between the hydraulic and the electric brakes known as brake blending. With a high output of 800kW, the brakes are subjected to a lower load and could be reduced in size.

Additionally, the vehicle is started with a battery status of 85% (SoC) and recuperation is possible which means more than 50% of the energy can be re-used depending on the race track.The model also features an Electric Power Steering (EPS).