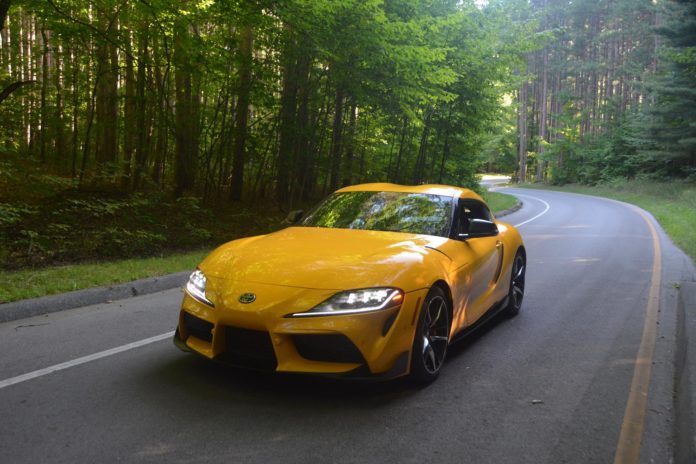 Back in 2014, at the Detroit Auto Show, Toyota pulled the veil off their latest concept car, the FT-1. It was a stunningly gorgeous car, like nothing we’d ever seen, not even from Ferrari in a very long time – curve upon sensuous curve, vents tucked in here and there. People loved it. So when Toyota pulled the veil off their new car in Detroit five years later and formally introduced the new Supra, nobody was surprised that it’s design was based upon the FT-1. In fact, it was the worst kept secret in the auto industry. But the press and public alike loved the design, loved the look, and waited impatiently for first drives. Built as a joint project between BMW and Toyota to share technology and defray the costs of building new low-volume sports cars, the car shares a platform and a BMW engine with the Z4M40i. However everything is tuned differently and styled differently. So while the BMW Z4M40i is a capable sports car, it’s tuned less aggressively than the sports-oriented GR Supra. Our Nitro Yellow GR Supra 3.0L Premium was built in Graz, Austria – probably a BMW assembly plant.

I’ve gotten the impression over the last few years that the new Supra has been somewhat controversial; especially for the Supra fanboys, that maybe it’s not quite what they wanted it to be. Honestly, not having liked the design of the last Supra and not having driven any Supra before, I have no skin in the game and approached the new car with an open mind.

I think the exterior is gorgeous. I love the curvaceous lines and the long hood. It hints at the Lexus LC500 but looks lighter, smaller, sportier, more agile. To my eyes, there’s some Formula1 influence in the design too, subtly integrated into the overall shape. Toyota says there’s some 2000GT in there too but that doesn’t stand out to me quite as much. I noticed that none of the myriad vents were functional but they still injected enough design drama that I didn’t care. I can overlook faux vents when they add something to the design.

Inside is a cozy two-seat cockpit that’s quite comfortable for long stretches. The leather seats are well-bolstered but easy to get in and out of. The gauges are simple – a large tach with a digital speedometer in the center of it and bar graphs to tell you how much fuel is left and what the engine temperature is. The center stack has, from top to bottom, a digital infotainment screen, radio controls, climate controls, and the exquisite leather-wrapped carbon fiber console that contains the gear selector, sport mode button, traction control off button, and infotainment controls. Simple but elegant. I found myself right at home in it. The only disappointments were that the infotainment screen was small and didn’t provide great detail or a lot of information, and finding only two pedals in the footwell. I had really been hoping this might be a manual-transmission car but I was disappointed to learn that all are automatics with paddle shifters.

The engine is a BMW 3.0L twin-scroll turbocharged straight-six. I was initially surprised to learn it had a BMW engine but then recalled that in Toyota’s venture with Subaru (86 GT), a Subaru boxer-four is under the hood. As far as I’m concerned, there’s nothing wrong with it as long as it works and, boy, does it work. It provides 362 hp and 366 lb-ft of torque to the rear wheels through an 8-speed flappy paddle transmission. It’s an incredibly smooth engine that revs delightfully easy. I immediately fell in love with the engine. Toyota tuned it perfectly for this application. The automatic transmission worked well, trying to anticipate your next move but the paddle shifters seemed, well, more appropriate. They don’t shift as quickly as the Maserati Ghibli Trofeo we drove recently but they’re pretty darned close. Certainly well enough for us to thoroughly enjoy working through the gearbox to make the most of the engine’s torque and horsepower.

The suspension is an adaptive variable sport set-up with double-jointed McPherson shocks in front a multi-link arrangement in the back. It did a fantastic job of soaking up the worst bumps and bad pavement while providing fluid cornering dynamics that left you feeling confident in it’s abilities. An active rear sport differential out back helps keep it stable while providing the best traction possible to the driver to make the most of the rear-wheel drive. 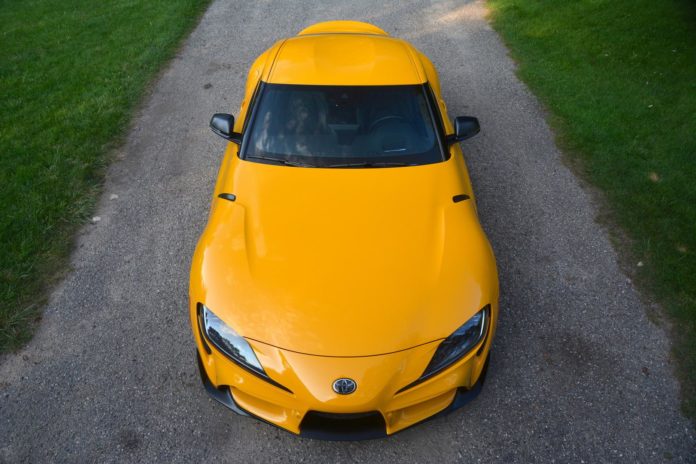 The 19” forged wheels were wrapped in Michelin Pilot Super Sport tires. They provided ample grip, even when we overcooked a corner or two. Inside the wheels were Brembo 4-piston calipers up front and single-piston calipers out back that provided immediate and predictable stopping power, albeit with some grabbiness at low speeds.

The only mechanical interaction that we had trouble with was the steering. Mechanically it worked fine, but the steering ratio didn’t feel natural to us. It was a minor thing but we found ourselves noticing that our turning of the steering wheel didn’t always put us where we wanted to be and required just a bit of correction. Not really a problem, but a quibble in an otherwise near-perfect package.

How is it to drive? In a word, satisfying. Climb in, pull the door closed, and pull the seat belt across you, buckling it in. Press the brake, push the start button and the 3.0L straight-six whirrs to life. The sound is pleasant, adequately loud. You feel little to no engine vibration coming through. Shift the transmission into gear and head off. A light touch of the throttle nets you a little boost in speed. Hold the throttle down and the engine gets noisier and you feel the car start to pick up speed when the turbo pressure builds and you get a seamless push of acceleration that pushes you back in your seat with some force. Very nice. 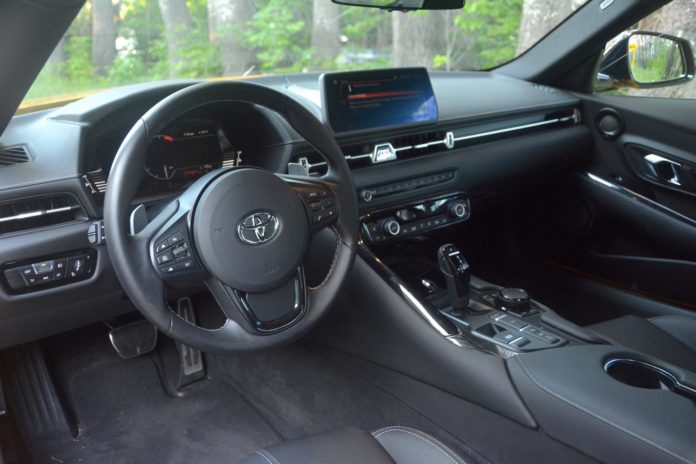 Push the “sport” button in the center console and the exhaust valves open up to provide a throatier, louder sound. Shift the gear selector over into manual mode and slip your fingers behind the paddles on the steering column. Right is upshift, left is downshift. The transmission is quick to shift with every flick of the shifters. Plant the throttle and shift through the gears while the Supra rockets ahead and it’ll hold you against the driver’s seatback until you let off the throttle. Brake softly and you’ll get nothing and then it’ll suddenly grab and bob your head forward a bit. Brake strongly and it’ll slough off speed as quickly as you need it to.

Find a fun curvy road and the car comes alive. Turn-in is sharp and though we complained about the steering ratio a little, it works well enough to steer precisely although you may need to correct a bit here and there. The tires grip the pavement tightly and the suspension keeps them planted against the pavement while controlling the car’s body motion. It transitions beautifully from corner to corner and fluidly glides through the corners with grace and dexterity.

Fuel economy is reported as 30 mpg on the freeway and 22 mpg in the city. That feels right.

The price of our came in at $57.000 USD. The base price was $54,500 USD. That’s pretty reasonable for a car of this caliber. If you’re considering one, make sure you’re okay with being noticed though because the Supra will get you noticed. I came out of a restaurant once and found people taking pictures of it, and I was filmed on phones more than once driving through intersections.

As I pushed it up one of my favorite twisty roads one evening, windows down, enjoying some sporting driving on a beautiful summer’s evening, I found myself absolutely loving the car. It was one of the most engaging and fun cars I’ve driven all season. And isn’t that what driving is all about? The new Supra is a wonderful and balanced blend of power, performance, and handling. It’s a driver’s car and a damned good one in my opinion. It’s one I’d consider parking in my own garage and that’s not something I say often, especially of an automatic transmissioned car.