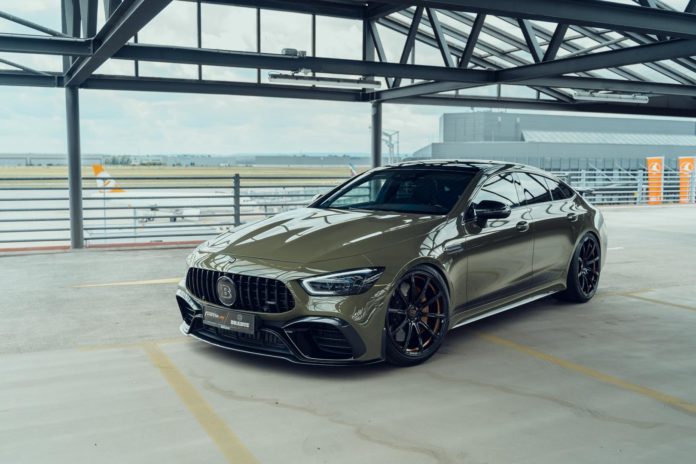 The Mercedes-AMG GT 63 S redefined the “4 door coupe” market years after the CLS Coupe began the now popular cult among German car makers. And Brabus has already indicted it into their category of supercars. This here is the Brabus 800 based on the GT 63 S AMG. The vehicle was converted to a ‘genuine’ Brabus model by German tuner Fostla.de.

The AMG GT 63 S featured a powerful factory-built engine in AMG’s portfolio with an output of 639hp and 900 Nm of torque as standard. The Brabus PowerXtra B40S-800 was used here, a performance upgrade which increased the power output of the 4.0L V8 twin-turbo engine to 800hp and 1000 Nm of torque. The acceleration from 0-100km/h is achieved in 2.9 seconds at the top speed is 315km/h.

The maximum torque was limited to 1000 Nm to protect the powertrain. The vehicle was already equipped with a factory aerodynamic package, nevertheless, Fostle.de added an additional exterior accessory package.

The exterior outlook of the Brabus 800 four-door coupe features a full-body wrap in CC4165 Badlands Green with copper elements which is similar to a military vehicle and the front part of the vehicle has been wrapped with an XPEL Ultimate Plus film which protects the paint from stone chippings. The Badlands Green wrap is a limited edition film from PWF.

The vehicle has been fitted with a set of Brabus Monoblock Z forged wheels and high performance Pirelli P Zero tires . The front axle features 10.5×21 inch wheels with 275/35 ZR 21 tires whereas the rear axle features 12.0×22 inch rims with 335/25 ZR 22 tires. The wheels have been finished in gloss black paint with copper elements.

The GT800 has also been equipped the vehicle with an Airmatic Sports Unit system. The system lowers the centre of Gravity of the vehicle electronically to improve the performance as well as the driving dynamics.

The interior of the vehicle features a starlight headliner which shimmers in the dark thanks to the countless LEDs.