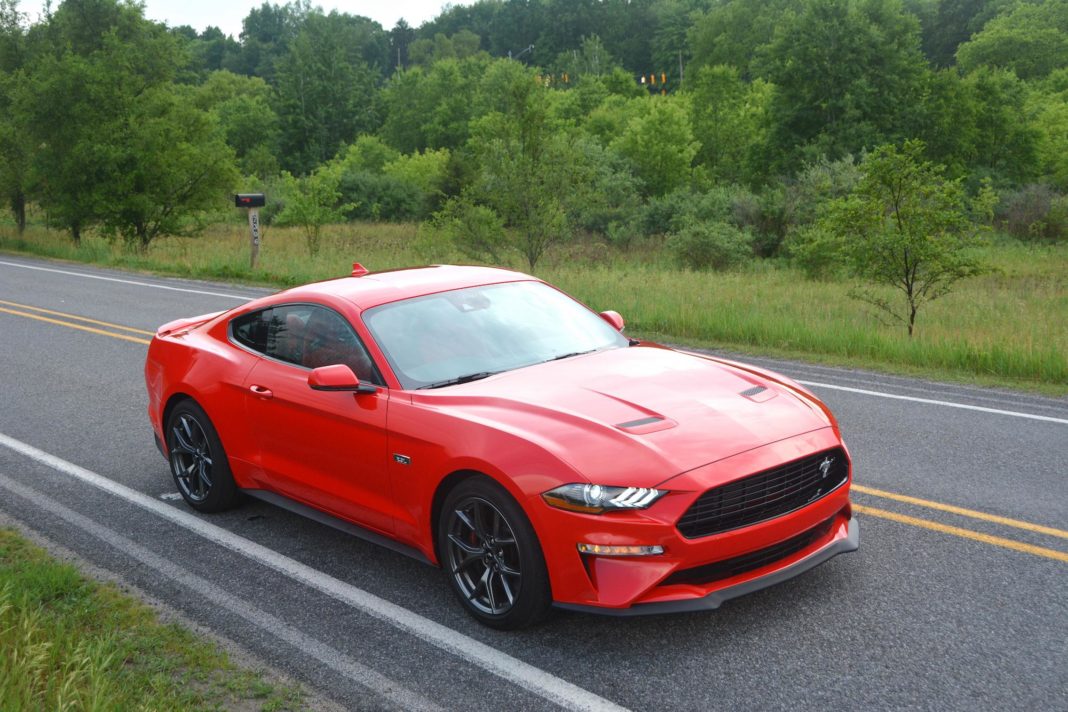 Last year, somewhat late in the summer, we looked at and reviewed the the 2020 Ford Mustang Ecoboost Coupe with Ford’s new 10-speed automatic. For those not in the know, Ecoboost refers to Ford’s ubiquitous turbocharged 2.3L four-cylinder engine. We felt some real promise in the platform when we drove it but the 10-speed automatic was determined to keep things efficient, which kept us from really enjoying the car. It also kept the revs low, where the most uninspiring sounds were created and released from the tailpipes. Only with the drive mode set to “Race” did it begin to reveal it’s potential and we spent our entire time with the Ecoboost Mustang wishing it had come with a manual transmission. This year, Ford was kind enough to indulge our request and we were able to spend some time shifting through the six gears to see if it made a marked improvement.

It’s still got the same exterior design as last year, and it’s still utterly iconic. This generation’s body style is probably the most faithful and attractive of all the later Mustang’s stylings and we love it. From the aggressive front end and grille box to the bladed tail lamps, this Mustang was designed by someone who not only has some historical reverence for the model, but also has an excellent sense of proportion and taste.

The inside is just as nice. Our car once again came with the Premium package which, along with a whole suite of electronic safety and security programs, also includes some of the most gorgeous seats ever seen in a Mustang. The bright red (“Showstopper Red”) Recaro’s that color block the black interior have bolsters adequate for spirited driving but that are still easy to get into and out of. There’s plenty of room in the front seats for just about any size person – I’m 6’1” and 250 lbs and never felt remotely constrained, while my 4’10” 95 lb wife felt like she was “in a ballroom by herself” in the passenger seat. A quick glance at the bright red backseats revealed that there was absolutely no usable legroom for backseat passengers. Its more of an attractive bolstered package shelf or a dog seat.

The view out is good, and the side mirrors and rear-view mirror give you a good idea of what’s behind and to the sides of you. All the controls fall readily to hand and most of the frequently-used controls are also duplicated on the steering wheel. All of the controls have a good feel to them, except for the cheap knock-off plastic toggle switches in the center stack. Not only do they feel cheap and somewhat delicate but none of them toggle downwards which is an easier and more natural motion to perform than toggling them upwards when driving. Metal switches that activated downwards would have been a better choice, in our opinion. And I’m not sure how the car comes without heated or ventilated seats in a “Premium Package” but it was devoid of both. At the very least, heated seats are expected in this day and age.

None of the other features have changed since our last visit with the Mustang Ecoboost. Start it up and the 2.3L rumbles to life with a lot of noise and a pretty decent imitation of a larger displacement engine. My hats off to the exhaust engineers. It sounds a lot meaner than most four-cylinder engines I’ve had the privilege to hear, and I guess if it makes 320 hp it probably SHOULD sound aggressive. The car’s body feels pretty tight and solid but we had a mystery rattle coming from the back that I’m pretty sure was just a loose license plate surround and nothing to do with the actual car.

Shift it into first, let out the clutch, and the car moves off without issue. The gearbox shifts smoothly and cleanly with only the slightest bit of notchiness. The clutch pedal is a light but on the heavy side of light. Ford knows it’s customers are going to be rough on it and drive it spiritedly and it feels robust enough to take the abuse. Working your way through the gearbox is rewarding. Instead of a computer trying to keep your driving fuel efficient, you have complete control over where in the rev band you keep it. If you want to hold it in the top of third all day, you can do that and it feels very rewarding to have that freedom.

First gear gets you moving, second starts to give you some speed, but third gear really shines. this is where you feel a major increase in speed. It’s so much more noticeable that you wonder if first and second have been holding out on you. Downshifts are as easy as upshifts and the platform responds to your directions much more readily than the automatic. If you enjoy driving and have been interested in a Mustang, the manual is worth it’s weight in gold. It really helps the platform shine.

The magnetic suspension is responsive and absorbs bumps and cracks in the asphalt nicely while providing good feel while cornering but it feels pretty firm, even in “Normal” drive mode. Not harsh, just very firm, which lends some sporting feel to it. The steering is quick and the car turns into corners eagerly but the tail seems to slow it down mid-corner like an anchor was thrown out. Given the short wheelbase of the car, it’s likely due to stability control cutting in and keeping the rear end locked down so it can’t get away from new Mustang drivers. We can probably thank YouTube posters for this one, given the sheer volume of videos depicting Mustangs leaving car shows sideways.

The brakes are strong but a little grabby. Gently push the pedal and you get nothing at first, then with a little more prodding, they grab suddenly and firmly and make braking efforts look clumsy until you get accustomed to their feel and can anticipate and adjust for it. It’s not a huge issue, just one that requires a little getting used to.

Fuel mileage is estimated by the EPA to be around 20mpg in the city and 28mpg on the freeway, which is pretty good for a sporty car.

The Ecoboost Mustang starts about $32,000 base. Ours had roughly $13,000 in options on it, mostly performance options related to the Ecoboost platform, which brought the total up to around $46,500 with delivery charges. Strangely enough, if you were careful with your option selections you could get a V8 Mustang with magnetic shocks and a manual six-speed for roughly the same money, which seems a more interesting proposition. Perhaps that’s what we’ll review next.