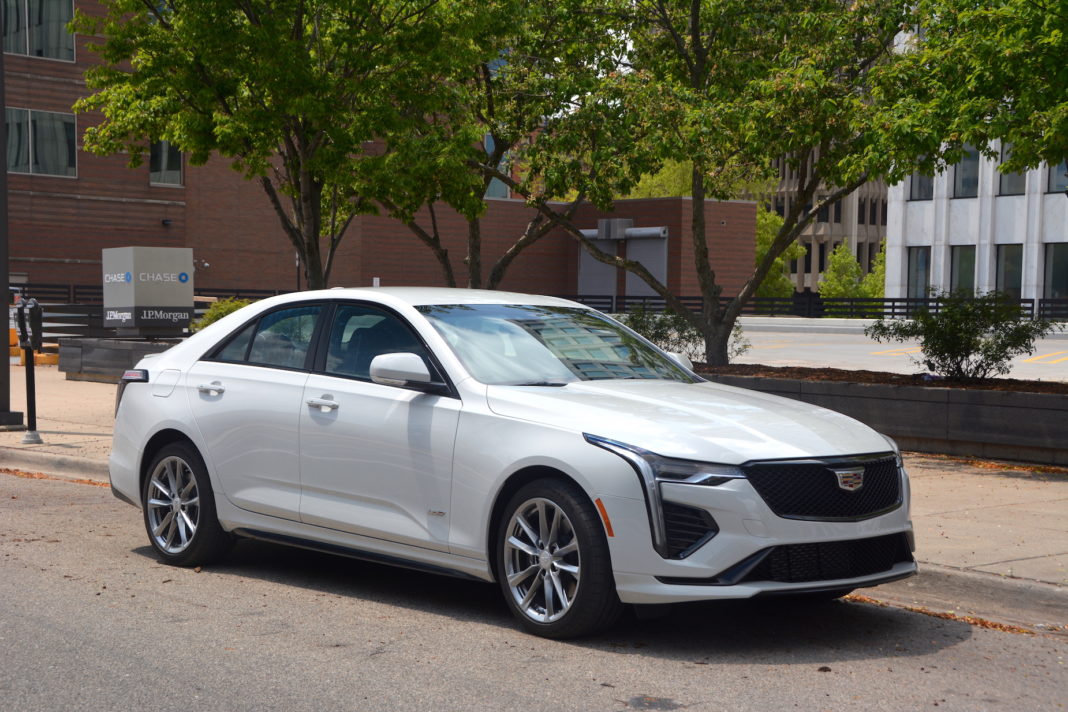 Change is good….ish. We here at GT Spirit have had an abiding respect, if not outright love, for Cadillac’s V-Series cars. The CTS-V and the ATS-V were autobahn rockets and track warriors, able to run with some of the best cars in the world and hold their heads proudly. So when Cadillac switched over to from the CTS and ATS nameplates to the CT4 and CT5, we eagerly hoped they would bring out a set of V-series twins to fill out the roster and continue this enjoyable performance tradition. Cadillac didn’t disappoint and recently allowed us some seat time in the CT4-V. What we found both surprised and intrigued us.

A walk around the car reveals standard Cadillac design cues but striking new lines. There’s an understated elegance to the lines, refined but aggressive at the same time. More than one person complimented me on “my” car while I drove it. Design is subjective but I find it quite attractive and purposeful looking. It lacks the uber-aggressive performance details that made the CTS-V and ATS-V so aggressive – the carbon fiber splitters and venturi tunnels in the back, The steep spoiler on the rear decklid – but it’s less likely to be noticed by the police. Not necessarily a bad thing.

Inside, the seats are comfortable but less bolstered than the ATS-V we drove two years ago – MUCH less bolstered. They’re electrically adjustable, both heated and ventilated, with lumbar controls and (if you’re lucky enough to be the driver) massage controls. A narrow center console separates you from the passenger seat. Instead of a 6-speed manual gearbox, an automatic transmission selector dominates the console. No manual transmissions in these V-cars. It’s surrounded by infotainment control knob, drive mode selector buttons, and cupholders. It’s all tastefully laid out amidst real carbon fiber and aluminum trim. Climate controls dominate the stack above the console, and the infotainment screen – a disappointingly small one at that, given what Tesla provides these days – sits atop that. The steering wheel is attractive, all rich leather and aluminum with the Cadillac crest squarely in the middle. The gauges are easy to read and the space between them has myriad informational readouts to choose from. The back seats are comfortable but getting back there is a bit tough with the low roof line. I hit my head a few times trying to get in.

Under the hood lies a “2.7L turbocharged engine with twin volutes” hooked to GM’s new 10-speed automatic transmission. What kind of engine, you ask? Excellent question. Cadillac tries to evade the questions both on the window sticker and on their website, repeating the “2.7L turbocharged engine” description. Power-wise, it felt like a turbocharged V6, but the sounds it made and the way it felt at low speed made me suspicious that it might be a four-cylinder. And sure enough, if you pop the hood, you’ll find a turbocharged four-cylinder engine. This disturbed me, possibly more than it should have. This is supposed to be a mighty V-Series Cadillac. It says it right on the rump of the car, in fact. A four-cylinder engine in a V-Series? Who made this decision?

I suppose the $51,000 price tag should have given me a clue. This car isn’t nearly as expensive as the last ATS-V we drove. Is Cadillac diluting the V-Series name for sales? I mean, I’m sure they’ll move a LOT more $51k cars than $80k ones, and few drivers were really ever able to exploit the performance potential of the original V-Series cars, but.…a four?

Here’s the thing though: this turbocharged four-cylinder generates SO MUCH thrust and the 10-speed transmission holds it right in the powerband and cracks off shifts so rapidly that it feels like a giant wave of torque and thrust are pushing the car up the road so rapidly that it might never end. You certainly don’t want it to when you’re experiencing that acceleration. It made me think of the hotly turbocharged rally cars during the heyday of rallying. According to Cadillac, it generates 320hp and 380lb-ft of torque. Those are impressive numbers for a turbo-four and to move a platform as heavy as the AWD CT4 as quickly as it does means there’s some magic taking place somewhere.

First off, it’s one of the largest four-cylinders on the market, if not the largest. And it’s direct-injected and turbocharged as well. But what’s new about it is that it uses a “dual-volute” turbocharger for greater efficiency. Greater efficiency means less wasted power. Less wasted power means more speed. It’s a complex system but in a nutshell, the exhaust manifolds for cylinders one and four don’t mix with cylinders two and three. They’ve been paired up with the cylinder with which they share an exhaust power pulse. By not mixing the exhaust manifolds, there’s zero chance that the power pulse from one cylinder can bleed off into a cylinder that’s not pulsing at the time, which makes things more efficient. These two exhaust runners feed separately into the turbo on opposite sides of the scroll, balancing it out and spinning it more efficiently. This creates more power with a much faster throttle response. It’s all very technical but trust me, it works and the mad rush of acceleration proves it. In fact, it’s acceleration matches that of Cadillac’s twin-turbo V6 engine, which is darned impressive. 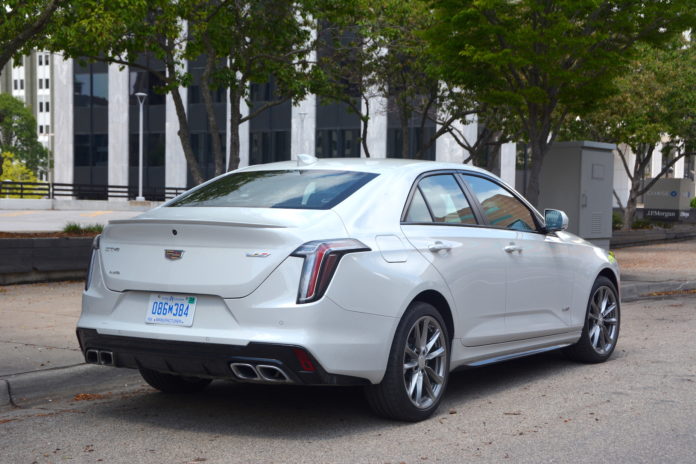 The chassis is both capable and compliant. It’s got adjustable shocks that firm up from Touring Mode to Sports Mode and on to Track Mode. The ride is remarkably smooth. It doesn’t beat you up, even on the worst pavement. It absorbs the worst bumps and keeps the platform stable, level, and controlled. At freeway speeds, tire and wind noise are minimal. The tires are grippy and between the suspension and tires, you feel confident in corners and traffic maneuvers.

The brakes are capable of great things when you’re driving hard. They scrub off speed without complaint and they do it in linear, intuitive fashion. However, when they’re cold and you’re trying to drive sedately they can feel grabby. A little pedal action can buy a lot of stop. It’s not hard to get used to, but it’d be nice if you didn’t have to try.

Cadillac and the EPA estimate that you’ll get 20mpg in the city and 28 on the highway. Those are decent numbers and are close to what we got in the week that we drove it.

We did have some minor gripes. When you first put the car in gear, the drivetrain lunges against the brakes like an impatient dog eager to go for a walk. Some obedience training is recommended. The brakes can be grabby when they’re cold. These two items kind of make you question the whole “luxury car” title the first time you drive it. Luxury cars should have better manners, even if they are marketed as performance cars. Finally, the sound of a four-cylinder isn’t an inspiring sound, nor does it suggest “expensive luxury.” But it certainly delivers the goods, even if the sound isn’t inspiring.

So is it a true V-Series? Well, it is and it isn’t. It’s certainly impressive and enjoyable to drive, but it’s not the fire-breathing monster that the earlier V-series cars were. But it’s a better everyday driver with more accessible performance for everyday conditions. And it’s much more affordable too. It’s a middling performance car. We liked it a lot, but it’s not quite as exciting as the older V cars. As we understand it, later this year, Cadillac is introducing the V-series Blackwing cars, which should be more in line with the older V-series cars. We’re hopeful for the opportunity to drive and report on them. Until then, the current V-series cars will do.