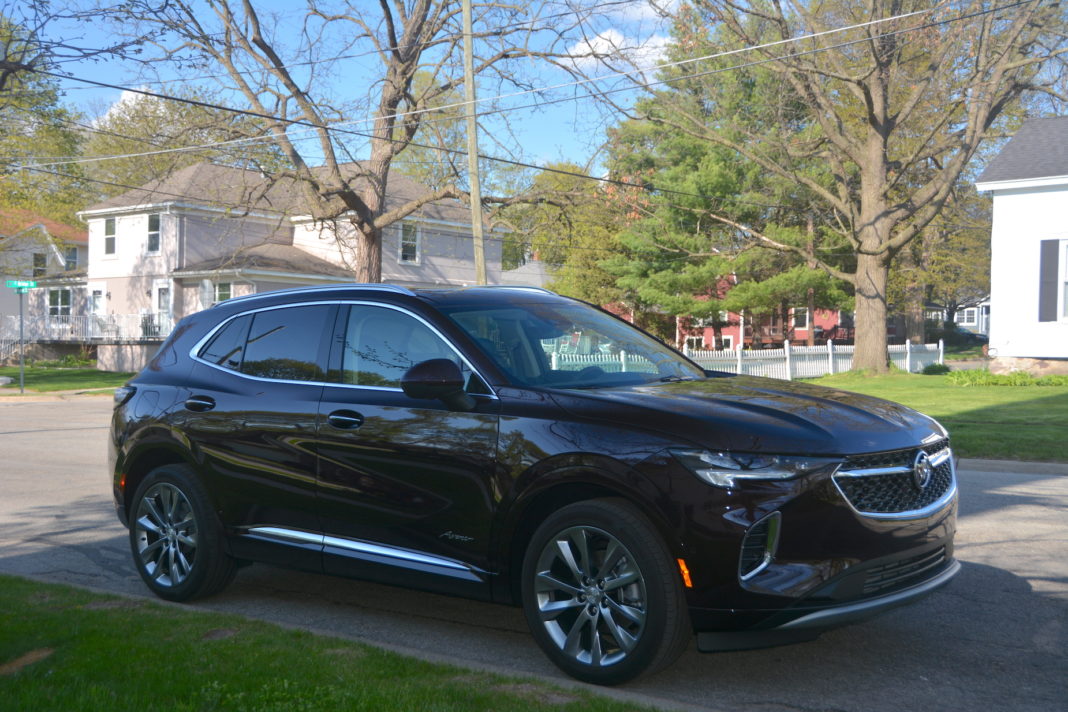 The all new 2021 Buick Envision is designed to slot between their best-selling Enclave, a family-size SUV, and their diminutive Encore, which might be the poster child for city-size micro-SUV’s. It might be the sweet spot in the Buick family, size-wise, and with it’s attractive styling we think it could easily become Buick’s volume leader. Buick loaned us one recently in what they refer to as the “Avenir” trim level. This is their top-of-the-line trim level named after their attractive concept car that inspired modern Buick styling a few years back. Our model was only front-wheel drive, not the AWD model that’s also available.

Beauty is in the eye of the beholder but we really liked the look of the Envision even though it shares some of it’s overall design cues with the Volvo XC-60, which isn’t a bad place to start. It’s sculpted styling and proportionate lines give it a balanced and eye-pleasing look. It’s a four-door model with a lift-gate back hatch. The relatively flat hood, pronounced fender flares, and pinched rear side windows give it a sporting look, while the chrome accents draw the eye and fool your brain into thinking it’s a tighter packaged design than it really is. Our car arrived in “Rich Garnet Metallic” that shined in the bright sunlight like a, well, a rich garnet.

Inside we found black leather seats, carpeting, and dash, stylized stitching on the seats and stylized wood trim on the doors. The dash and controls are completely oriented to the driver’s seat, which looks odd as it seems to exclude the passenger from any involvement but it makes sense and you don’t feel encroached upon if you’re riding shotgun. There’s plenty of leg and head room for both front and rear-seat passengers. Theoretically it seats 5, but at least one of those in the backseat better be a toddler or small dog. Front seats were heated and ventilated, the driver’s seat had adjustable lumbar AND massage while the passenger seat only had lumbar adjustment. The outer backseats were heated because we had the Avenir trim level. The steering wheel was heated as well. All in all it was fairly comfortable. We took it on a 5 hour trip and were never uncomfortable at any point. 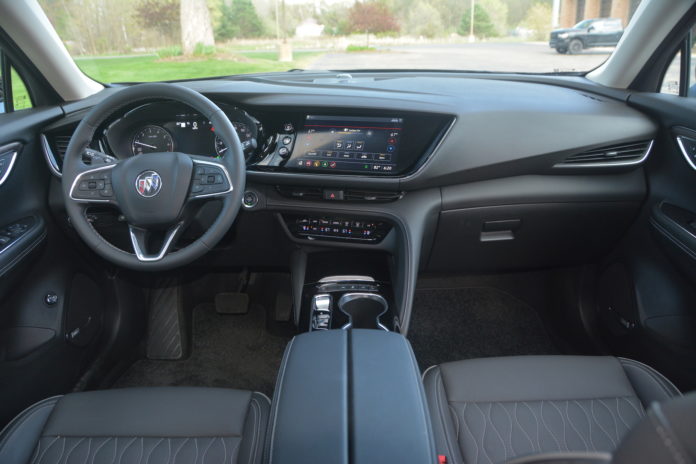 The engine is a 2.0L turbo-charged four-cylinder, which seems like it should be too small for this vehicle but its 228hp and 268 lb-ft of torque, which, when hooked to a nine-speed automatic transmission, do a decent job of propelling it up the road with some grunt. It’s got decently strong mid-range power for overtaking and passing at speed. The shifts are quiet and mostly unnoticeable but there were a few instances when it stood out and it felt like it was shifting and shifting and shifting and shifting. But it was programmed to shift at good points and it was very smart about selecting a gear for you and seemed to have some clairvoyance and understanding as to what the driver was doing and always seemed to be in the best of the nine gears at the right time. All that shifting was good for fuel economy too as we averaged in the high-twenties in a mix of city and freeway driving. Following the growing trend of push-button transmissions, it has a row of transmission buttons and switches. All parking and neutral selectors are push buttons and all movement selectors are pull switches. It’s a little more creative than simple buttons and works well.

The steering felt particularly sharp, which we did not expect, and it turned into corners with a sense of eagerness that belied it’s heaviness and size. It felt like it was trying to do an impression of a Miata, and while we wouldn’t expect fantastic handling like a Miata, it held it’s own and seemed to enjoy corners and curves. It instilled a sense of confidence about it’s abilities. Our car also had the continuously adjusting magnetic suspension which always improves any car it’s installed on. This is where our primary complaint comes in though. The suspension and tire noise needs to be better dampened. We heard every THWACK! of the tires against freeway expansion joints, filled asphalt cracks, and potholes. We dealt with the drone of the tires against the pavement. For a car that stickers at $45,305, we shouldn’t be hearing this much noise. A less-expensive Mazda CX-5 is MUCH quieter than this is. I suspect Buick benchmarked this against a Lexus, which are notorious for suspension and tire noise, and thought they were doing pretty well.

The ride, however, is incredibly smooth. You hear the expansion joints and tar strips but you don’t FEEL the expansion joints and tar strips. It’s as smooth as glass. In fact, everything about this car is smooth. The engine is either incredibly smooth or is extremely well isolated from the cabin. Everyone that rode in it remarked about it’s smooth ride and lack of vibration and road feel. Which makes it feel more expensive than it is.

Besides the road noise, the only other issue we had was the size and placement of the side mirrors. They seemed startlingly short (from window to outer edge) and we found ourselves double-checking them and craning our necks for a more thorough view of what was behind us.

The brakes work very well too. We had a couple incidents wherein we had to stop suddenly and the brakes not only did a superb job of stopping the Envision quickly and safely, but the modularity of the brakes was very intuitive with no surprises, mushiness, or grabbiness. Like the rest of the car, they did exactly what you expected them to with minimal fuss.

All told, there’s a lot to like here. The issues we complained about aren’t necessary deal-breakers but they’re something to consider when pricing one out. The Envision starts at nearly $35,000 for the base level, and adds technology and creature comforts to bring the mid-level trim level in at $39,000, and then they offer the Avenir trim level at $43,000, where there aren’t many options left to add. The pricing seems a little high for the size and power of the vehicle – there are a LOT of competitors out there that are just as good or better for less – but it’s loaded with features and like all GM divisions, they often offer sizeable discounts and rebates so you feel like you’re getting a great deal.