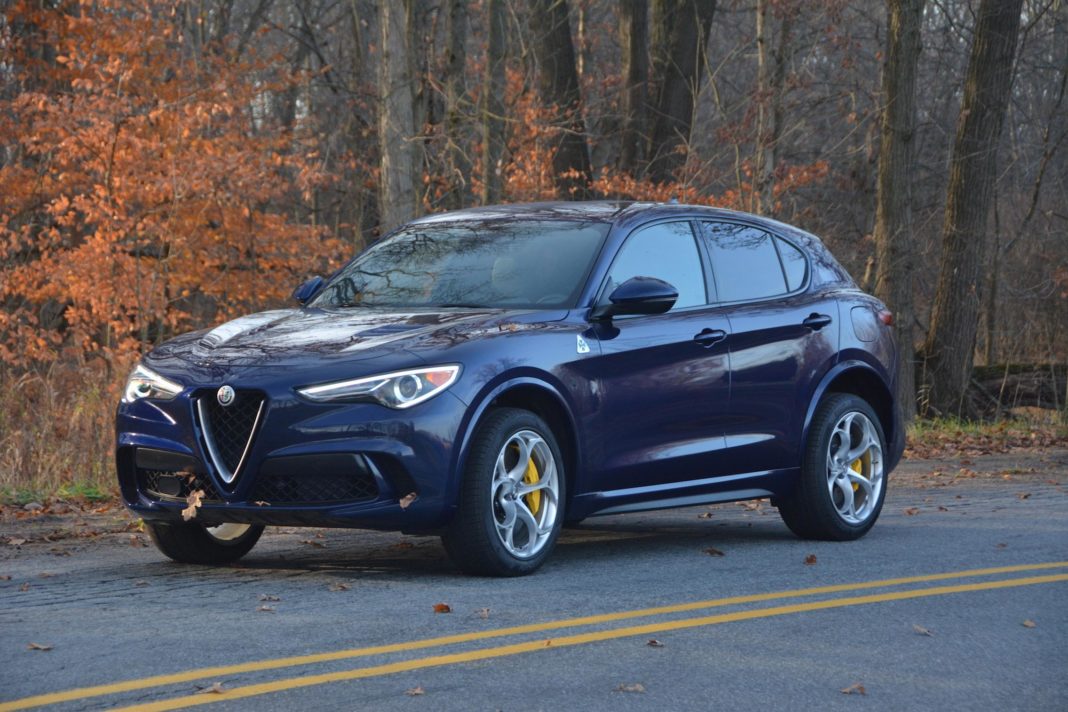 It’s Autumn once again and the leaves remaining on the boughs are vivid yellows, oranges, and reds, like colorful confetti lying on a 1970’s tablecloth. This last shot of festive color standing is in stark contrast to the brown fields and dark green pines that line the road. I’m sure our Montecarlo Blue Stelvio must look fantastic flashing past the landscape, it’s bright silver wheels punctuated by the neon yellow brake calipers. After all, it looks fantastic sitting in a parking lot or my driveway, so why not out here as well? I realize we’re part of the festive parade of color out here today and it makes me smile a little.

We’re headed north today, towards the sprawling resort city of Traverse City, Michigan. We’re hoping to get some worthy photographs and have dinner at a restaurant my wife discovered a few summers ago with friends. Just a whimsical 120 mile drive north for food. This is not an uncommon thing around our house – we road-trip at the drop of a hat. Thankfully the Alfa Romeo Stelvio is a comfortable and nimble day tripping SUV and an afternoon on the road in it is an easy proposition. However, they delivered us the Quadrifoglio version and trying to keep the fire-breathing wagon at quasi-legal speeds is a Herculean effort on my part. So while my wife enjoys the scenery passing by, I’m trying my hardest to just relax and enjoy the ride, all too aware of the incredible performance just a throttle stab away.

By now, you’re probably familiar with the Stelvio Quadrifoglio, Alfa Romeo’s track-worthy SUV. Attractive styling, a bi-turbo V6, all-wheel drive, twin-clutch transmission, optional carbon-ceramic performance brakes. It’s not what you expect from an SUV, although you might expect it from Alfa. It’s built on the same platform as the Giulia, and given that the Giulia Quadrifoglio is an incredible beast of a car, why not build the Stelvio out the same way? Exactly!

Alfa delivered a 2020 model to us. As I mentioned above, it arrived in the richest, most beautiful dark blue I’ve seen in some time. It’s called Montecarlo Blue Metallic and it’s absolutely striking on the Stelvio. Matched with silver wheels and bright yellow Brembo brake calipers, it’s un bella machina. Easily the most beautiful Stelvio I’ve ever laid eyes on. Inside was basic black leather with white and green stitching and silver switchgear.

Under the hood lies the 2.9L biturbo V6, making 505 hp and 443 lb-ft of torque. This power is transmitted through the 8-speed twin-clutch transmission to the AWD system. The Q4 AWD system is primarily a rear-wheel drive system that transmits power to the front axle when it helps balance the chassis or when slip is detected. It’s a good system, working invisibly behind the scenes. And it’s astoundingly fast too. Too many times during the course of our drive, we’d come up behind someone traveling much slower on the rural two-lane highway. While my wife is adverse to speed (I know, right?!) preferring a slower pace for sightseeing, she had no issues with my nailing the throttle when traffic was clear and rocketing past the slower car. Which put a huge smile on my face every time we came up on a slower car. 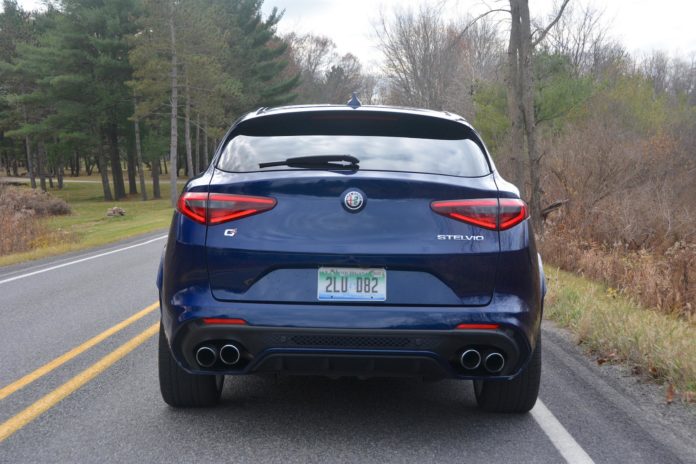 The Stelvio is a naturally nimble and sharp handling car. And while the ride is firm, it’s never harsh. The suspension does a wonderful job of smoothing out the roads imperfections and providing a comfortable ride while still handling like a sports car. Alfa’s DNA driving mode selector knob on the center console allows for firmer and sportier handling in D (dynamic) and Race modes, but in Normal and Dynamic modes, it was still quite comfortable. Race was a little too harsh for most roads I drove on, but felt promising as a track option.

Can I just take a minute to expound on how great Alfa’s DNA mode selector is? I realize that most cars today come with some form of drive mode selector, but I really like Alfa’s for it’s simplicity and effectiveness. The Quadrifoglio has four modes: A for Advanced Efficiency, it provides better fuel efficiency and is ideal for adverse and inclement weather conditions; N for Natural, the default drive mode that provides a pleasant mix of efficiency and performance; D for Dynamic, which shuts down the efficiency aspects and injects a little more performance into the mix – the exhaust opens up, the reflexes quicken, the steering tightens up a bit, the suspension firms up, and the engine becomes REALLY responsive.

Race is it’s own stand-alone mode on the DNA dial, sort of a Dynamic Plus mode. It increases the speed of the reflexes even more over Dynamic, makes the suspension rock hard, allows some more slip of the wheels but keeps your performance stability tuned to make your laps faster. It’s a very capable system, and by setting it to Dynamic or Race and engaging the manual shift option, you can control the Stelvio like a race car, using those big beautiful aluminum paddles behind the wheel to instantly and effortlessly shuffle through the gears as quickly as you can pull the paddle. Flick-flick! and you’re two gears down and the scenery is blurring.

Alfa Romeo uses Brembo brakes on all their US cars but our Stelvio came with the optional $8000 carbon-ceramic performance brakes. We weren’t able to really put them to the test, since they really excel at stopping the car hard repeatedly without fading or warping under lapping conditions, but they worked well enough. They’re a little grabby in normal driving but they’re easy to get used to, requiring just a bit more finesse than standard steel brakes. 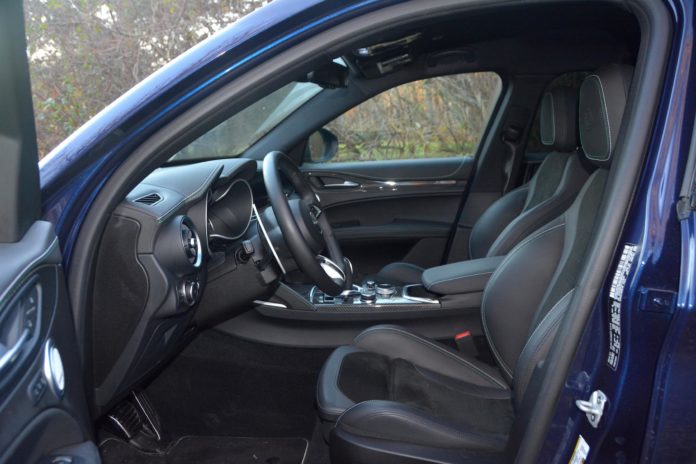 Inside are very well-bolstered driver and passenger seats. They’re very comfortable and hold one in place very well, even during ridiculous cornering manouvers. They, like the steering wheel, are heated. As temperatures dipped below freezing for a few nights during it’s stay with us, these features were greatly appreciated. Alfa Romeo has a new infotainment system this year. Instead of an endless menu tree of options, it has a “card” system whereby you select right or left for the “card” you want to adjust. Each card is a different feature, such as navigation, radio, safety settings, etc. By selecting that card, you gain access to the various options available under it. It’s a little easer to use than the old system and feels a bit simpler and more organized.

Inside the Stelvio, in motion, the noise is fairly low. Thumps of the suspension against road irregularities comes through as muffled. Wind noise is nearly non-existent. Tire noise is a little noticeable, but it’s not bad considering how wide and tall the wheels are. The view out is excellent and your higher vantage point gives you a slightly better view of the road than the Giulia would. People who rode in the Stelvio QV with me referred to the ride as “gliding.” As in, “it just glides down the road.” And it DOES have a nice, smooth ride to it. Bumps aren’t so much felt as heard. It’s an almost glass-smooth ride and it feels expensive.

So how was dinner? Meh. The food was okay but the staff wasn’t up to par. Overall, it was pretty disappointing. It made the ride up in the Stelvio QV the best part of the day. After eating we drove to Old Mission peninsula, which juts north into greater Traverse Bay, splitting the large bay into two long narrow ones and sought out some places to photograph the Stelvio. It’s very hilly, with curvy roads laid over it – a perfect environment for the Stelvio QV. Despite the vineyards and orchards and beautiful views, the position of the setting sun frustrated our efforts and we headed for home in pretty short order. 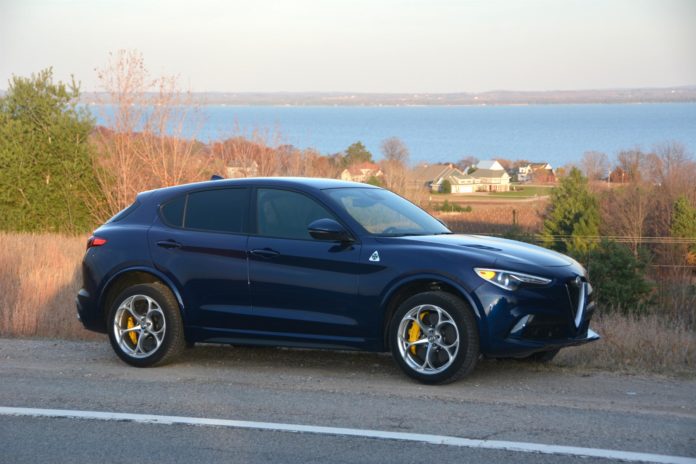 Later in the weekend, I was able to get away alone with it and run it on some fun backroads near my home in Normal, Dynamic, and Race modes. WOW. It goes from blissful sightseeing tour vehicle to race car with the flick of a dial. No corner daunted it, no straight withstood the incredible speed, no driver ever had such a big grin on his face nor palms so sweaty. The Quadrifoglio is an utterly amazing, transformative trim level. It eagerly dives into corners nearly as well as the Giulia QV, gliding through them with unexpected poise, flick the left paddle to drop a gear, listen to the engine blip, tip in the throttle in measured amounts listening to the engine growling, nail the throttle and rocket out of the other side of the curve like an F-22 on full afterburners.

The engine winds out to 7,000 rpms – right paddle shift – the speed comes on like a hallucination while the engine note starts it’s climb back up to redline again. When it hits 7,000 rpms again, you flick the right paddle again and start the whole thing over again…until you realize that you’re doing 135 mph and quickly let off the throttle and coast down to a semi-legal speed again. What a rush! It’s like a Giulia QV with a better view and more storage space. This thing has more performance potential than you can imagine.

As you can imagine, all that fun comes at a price. Estimated fuel economy mileage is 17 mpg in the city and 23 on the freeway for a mixed average of 19 mpg. We did a little worse than that but it’s hard not to flat foot the throttle when you can go from 0-60 mph in 3.3 seconds. Worth it.

The Stelvio Quadrifoglio starts at $80,500. Ours stickered at $94,400. That’s a lot of coin, but it’s a lot of car too. Half race car, half SUV. All Alfa Romeo and all that comes with that label. A bargain at any price.