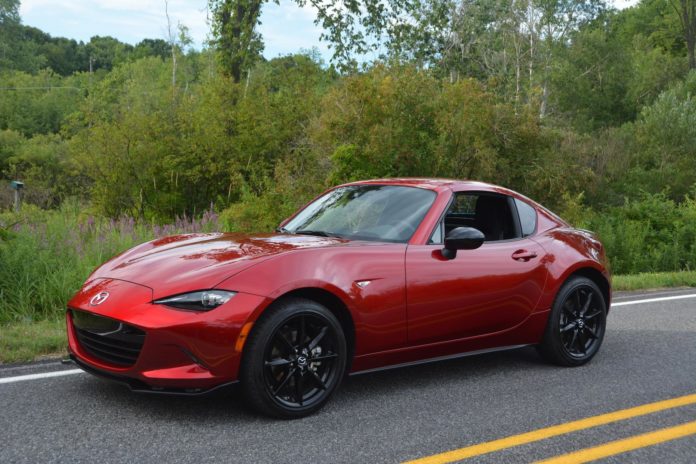 Mazda was kind enough to let us review the MX-5 Miata roadster Club last fall. With the improvement of the engine characteristics and the 25hp bump, it was utter perfection. The forgiving near-neutral chassis, the perfect manual 6-speed, and excellent brakes were finally teamed to an engine worthy of the package and the result was perfection. It needed nothing. When people asked me what the best car I tested last year was, I had to respond that it was either the $173,000 Maserati Levante Trofeo or the $32,000 Mazda Miata Club roadster, which startled a lot of people but it was true. So I was eager to see how the RF (retractable fastback) fared with the upgraded engine.

Mazda delivered a 2020 Miata RF in the most striking, otherworldly red I’ve ever seen. “Soul Red Crystal Metallic” they called it. Utterly gorgeous. The retractable fastback was still entertaining as ever at stoplights as it did it’s mechanical dance to raise or lower the top. “The Magic Show,” I called it. Everybody loved watching the The Magic Show. The Club-level trim provided a limited-slip differential, Bilstein shocks, and a structural strut-tower brace to tie the body together a bit more. It also came with an automatic transmission, which initially caused me to recoil in horror but I decided to give it a chance. An automatic Miata is better than no Miata, right? Well, we’d see.

There are no new changes to the body. It’s the same new, more aggressive look that debuted in 2016. Quite a few people commented on how sporty it looked and it does have a more aggressive, sporting look to it. Your tastes may differ but I think it looks fantastic, especially in Soul Red Crystal Metallic.

The RF has a hard top targa panel that folds down under the fastback at the touch of a button. Hold the button and the rear fastback lifts off the deck of the car and the top panel and rear glass either rise up out of the back or fold down into it before the fastback resets itself on the body deck. The Magic Show takes about 14 seconds to accomplish. Easy to do at any stoplight to entertain other drivers.

Inside were black seats covered in a ballistic neoprene material that felt like it would last, black carpeting, and black trim. The tops of the doors were the same red color as the body and it made for a nice design touch. Aluminum accents throughout provided a little relief from the solidly monochromatic interior.

The engine was the upgraded naturally-aspirated 2.0L four-cylinder engine that we were able to experience last fall. It revs to 7500rpm now and revs much more easily than the last engine. It makes 181 hp and 151 lb-ft or torque – enough to move this 2400-lb sports car with confidence.

The transmission was a six-speed automatic transmission with shifter switches behind the steering wheel. The six-speed works well being manually switched between gears but the six-speed manual is still the preferable transmission. The auto isn’t bad but it sucks a lot of the perkiness out of the small engine. To really get the most out of this engine, pick the manual transmission.

The suspension was unequal-length aluminum A-arms with a multi-link arrangement in back. Bilstein shocks provided sporty damping while soaking up bumps with alacrity and providing good feedback. The brakes aren’t real large – no Brembo drilled rotors or six-piston calipers here – but on a car this light and balanced, you really don’t need much more than factory stock brakes. The wheels were 17” with summer rubber on them.

Out on the road, the little Mazda feels nimble and responsive, dicing through traffic with ease. The engine rockets the little car along quick enough to make you feel like you’re driving something with a bigger engine, but it’s the cars relative lack of weight that allows it. The automatic transmission, which disappointed us at first, grew on us although the desire for a true manual never completely faded. It did alright. We found we split the time between shifter switches and true automatic, depending on how sporting we were feeling. The switches could have shifted a little quicker for our money, but they weren’t as bad as a lot of other ones out there. But otherwise the car handled beautifully, as Miatas tend to, and was still a joy to drive.

It’s hard to believe that it’s been over 30 years ago that this little lightweight superstar was first introduced to the world. Mazda has done a fantastic job of keeping it relevant. While most cars get heavier and more powerful and softer, the Miata team has never lost their focus. They’ve kept the car petite, light, and focused on the joy of driving. The recent 25hp boost to 181 was a bit of a surprise but it was a welcome one and improved the platform considerably. You can spend a lot more on other brands but all you get is prestige. Mazda’s package is a hard one to beat for driver satisfaction. Keep it up, Mazda.