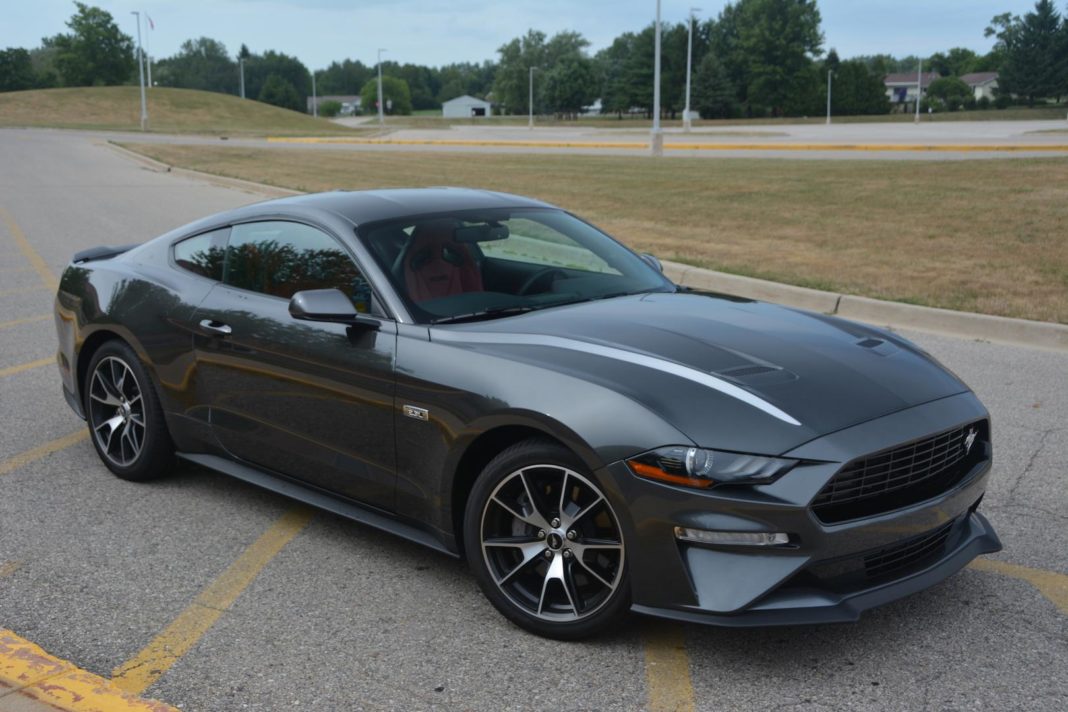 The Ford Mustang is one of Americas strongest automotive icons and has been since it was first unveiled back in 1964. Besides the Corvette, no other car produced in North America is more famous or more recognizable. Now in it’s sixth generation, today’s car has come a long way from the classic original – more rigid, more agile, and more powerful. Over the last decade, Ford has worked particularly hard to keep the car fresh and competitive.

It’d been a long time since I’d driven one. I believe it was back in 1989 or so that I got a chance to drive a 1984 Mustang convertible automatic four-cylinder. While driving with the roof folded down was a new and enjoyable experience, the rest of the drive was memorable for all the wrong reasons – the car, making under 100 hp, was painfully slow and the steering wheel seemed almost disconnected from the front wheels, to the point that it seemed dangerous in the curves. Hey, it was from the early eighties – a time not known for producing good cars. But by the late eighties, Ford was offering cars like the Mustang GT, which came with a 5.0L V8 and made a then-mighty 220 hp. It was the car that I and all the other gearheads in high school wanted. So with 30 years under the bridge since my last drive, I figured it was time to revisit the Mustang.

Ford was kind enough to loan us an Ecoboost Coupe version of their iconic muscle car. For those of you not in the know, the Ecoboost is Ford’s turbocharged four-cylinder engine. While it wasn’t the high-power V8 that made the model famous, this four-cylinder already had more horsepower than the V8 car I wanted back in high school and the turbocharged four-cylinder engine is not without precedent. In the mid-1980’s, when all of America wanted a 5.0L V8 Mustang, the SVO (Special Vehicle Operations) team released the Mustang SVO – a four-cylinder Mustang turbocharged to the hilt and loaded with performance goodies. To those in the know, it was a much more potent sports car than the GT. So I was eager to check out the 2.3L Ecoboost.

Our car came with all the performance packages you could get on the Ecoboost model: the 2.3L High-performance Ecoboost Engine; the 2.3L High-Performance Package, which consisted of a limited-slip differential, active-valve performance exhaust, summer performance tires, and some decorative trim pieces; Recaro seats; and a 10-speed automatic transmission. That all sounds promising, right?

Our car showed up in a color called Magnetic Metallic, a metallic gray color. Understated but very attractive. The car was undeniably a Mustang. Classic design cues integrated seamlessly throughout the muscular body. From the classic grille shape and the shape in the body around the headlights to the two sets of louvered red taillights; from the long vented hood to the fastback roofline, it’s all classic Mustang. Styling may have been hit and miss over the last few decades but the current design is truly a winner. It adheres to it’s design tradition and looks strong and athletic – like a certain wild horse. 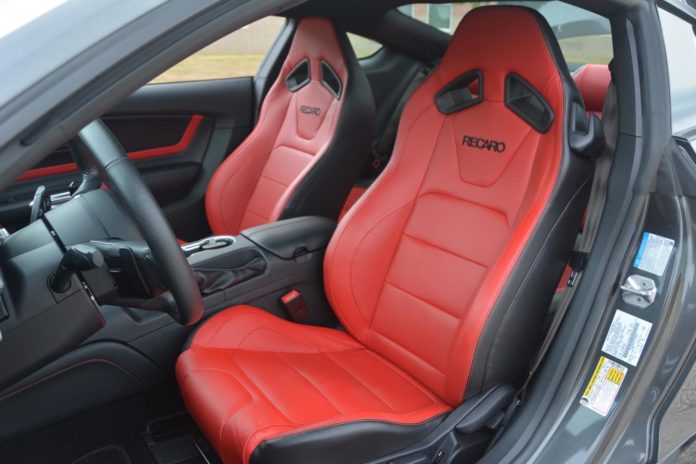 The inside is also classic Mustang, though it too has some beautiful modern updates. The very first thing you notice when you open the door is the beautiful optional Recaro seats. The seat face is a beautiful red leather – aptly named Showstopper Red – while the rest of the seat is black. They feel and fit as good as they look. The bolsters are small enough not to impede your ingress or egress while still providing good body support in corners. The rest of the interior is a mix of black, gray, and silver decor while a Showstopper Red stripe run through the door skins to match the Recaro seats. The dash is a traditional Mustang double-cockpit design like the original model, with slight elevations on the dash before each seat to create the design of a cockpit feel on each side. Most of the switchgear is modern and tactile but some classic toggle switches in the center stack give it a historical throwback feel. There isn’t much legroom in the back seats, but then there never has been in a Mustang. Seating in back is limited to dogs and legless children. The trunk is sizable – at least a 3-body trunk.

But enough about how it looks. How does it drive? Well, it has a lot of potential. Let’s run down the details first.

The 2.3L turbocharged Ecoboost engine makes an impressive 310hp and 350 ft-lbs. Redline comes at 6500 rpms but the engine revs easily and pulls strongly from 3500 rpms to 5500. While it’s not 5.0L V8 power or 427 Cobra Jet V8 power, it makes excellent power for a four-cylinder engine. It bucks the current trend of utilizing small-displacement 1.8L or 2.0L engines and instead uses a larger 2.3L one. It revs pretty freely and the turbo generates a strong rush of torque. Wind it out over 3500 rpms and the turbocharged mill happily kicks you in the back as it dashes for the horizon. It feels strong and flexible and eager to play. 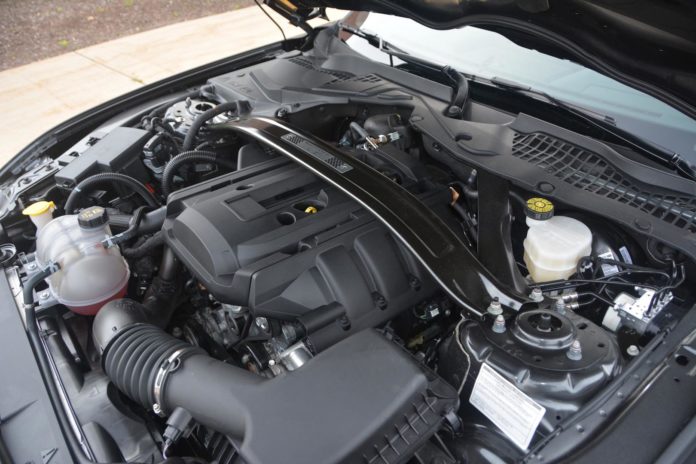 That engine is hooked to either a 6-speed manual or Ford’s new 10-speed automatic transmission with shifting switches behind the steering wheel for some manual control. Our test car came with the new 10-speed auto, which Ford is no doubt eager to show off. It’s designed to shift early and at low rpms in order to decrease fuel consumption and increase efficiency. With the engine generating decent torque even down low, the transmission shifts quickly and frequently while propelling the car quickly up the road. The shifter buttons behind work acceptably but aren’t as quick to switch gears as we would have liked.

The brakes were large 12.5” discs in front clamped by 2-pistons calipers. They feel solid and reliable, always stopping the car with little fuss, no matter the speed. They were very easy to modulate and we had no complaints with them during out time with the car. There was no grabbiness or sponginess issues with them.

The suspension was firm and sporting, a good balance of sporting firmness and bump-absorbing compliance. It leaned little through corners, and provided a sense of confidence in it’s handling while soaking up bumps. The independent rear suspension that is now standard on all Mustangs is a welcome addition and brings the car into the 21st century.

I’m pleased to report that they fixed the steering feel issues from 1984 and that there was superb feel and intuitive response throughout the duration of our loan. The car was easy to drive and entertaining through curves and corners.

The acceleration was strong and quick. There are a couple different drive modes available to you: Snow, Normal, Sport, Sport Plus, Track, and Drag Strip. While we didn’t notice much difference between Normal, Sport, and Sport Plus; we found Track to be an improvement over the others, turning traction control off, letting the engine rev more freely, and tightening up the shifts a bit. With traction control turned off, you can kick the back end out a little going through corners, so that shows you that it’s got some cahones. The brakes were reassuring. The steering felt direct and well-weighted. I could have really enjoyed this car…if it wasn’t for the transmission and the exhaust note.

The 10-speed automatic is the Achilles heel of the platform. We understand why Ford selected it for this car – it’s immensely efficient and quite the technological marvel – but it neuters the performance aspect of the car, removing the sporting nature and essentially making it feel like an economy car. First, the transmission shifts as quickly as it can, usually somewhere down between 2000-3000 rpm, where the exhaust note is the absolute worst. Higher in the rev range (anywhere above 3500 rpm) the exhaust note sounds great – sporting and powerful – but down below 3000 rpm it reminds us of a 1980’s underpowered econobox. It’s just a bad exhaust sound down there and unfortunately that’s where the 10-speed is designed to keep the rpms to save fuel. Not only that but you quickly realize that the transmission is *always* shifting. It rarely takes a break, hunting up one gear, down two gears, up two gears, down one gear, always trying to optimize fuel efficiency. The busy-ness of it gets tedious and when mixed with the lousy exhaust note, just makes for a very unsporting driving experience. The average four-cylinder Mustang buyer probably won’t notice or care, but if you’re a driving enthusiast you’re going to notice it and it’s going to bother you. 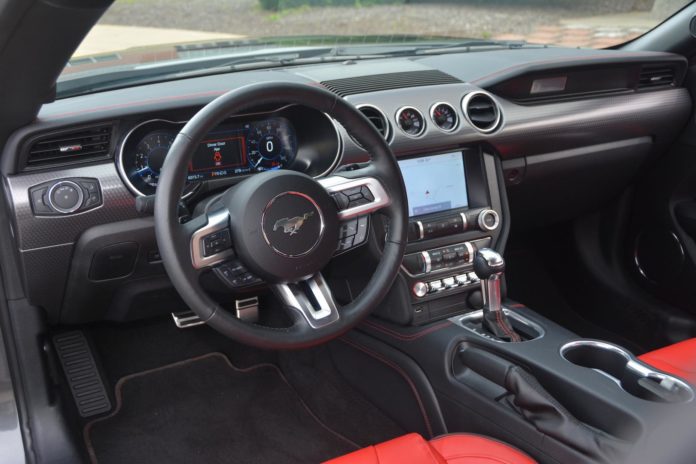 Well why don’t you use the shifter buttons on the back of the wheel? you ask. That should help. You’re right, it actually does help some. By controlling the shift points, you can let the motor wind out to where the exhaust sounds much better and enjoy a more performance-oriented exhaust note. I spent a lot of time in Track mode, using the shifter buttons and it helped. However, the speed of the shifts through the shifting switches are too slow to feel sporting. While it’s true that it only takes a fraction of a second to shift, the delay between your clicking the button and the shift happening lacks any kind of sporting speed and will leave you frustrated, especially if you’ve ever experienced a better shifting system and know how good they can be. Additionally, working through 10 gears is an exercise in awkwardness. Too often you find yourself caught out and needing to downshift four or five gears to get to the one you want to be in – an impossible task in the short amount of time you need in order to make it flow. While we liked keeping the engine in the range where it sounded good, we found it easier to simply leave the transmission in auto and let it do all the work for us.

I think the 6-speed manual would be a *much* better choice for driving enthusiasts. This car was loaded with all the performance packages one could select and with all the capability and promise in the suspension, brakes, and engine, this could be a really good driver’s car if it simply had a proper transmission.

Towards the end of the loan, I found myself wondering how much different the driving experience would have been if it had a manual transmission and I think the improvement would be shocking. It has all the essentials in place to be a really good sports car. It just needs a more sporting transmission to save it. I was actually a little sad that I wasn’t able to try that combination out. Maybe Ford will let us have a do-over with it, but with a manual. I’d really like that. It’s SO close to greatness.