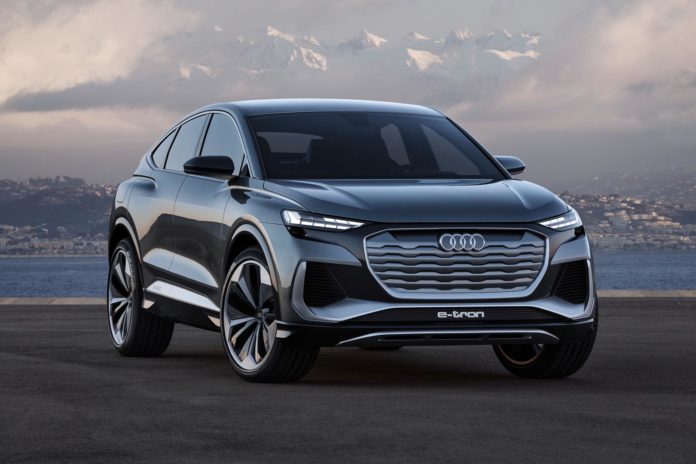 Earlier this week, Audi debuted a variation on its Q4 e-tron concept, the Audi Q4 Sportback e-tron Concept. The SUV Coupe is expected to go into production in 2021 alongside the standard model.

In terms of dimension, the Audi Q4 Sportback e-tron Concept differs very little from the standard Q4. The same height and width, the Sportback is one centimeter longer and flatter.

The Audi Q4 Sportback concept is powered by two electric motors which produce 300 hp, enough for a 6.3 second 100 km/h sprint and a 180 km/h top speed.

The Audi Q4 Sportback e-tron Concept gets an 82 kilowatt hour battery with the capability of travelling 450 kilometers on one charge. A rear wheel drive version will also be offered with a 500 kilometer range.

It sits on the MEB base which Audi shares with the rest of the Volkswagen group. As with most all-electric models, the electric powertrain adds 510 kg of weight. Audi mount the system beneath the passenger compartment for a 50:50 weight distribution.

Of course, what really separates the Sportback from the standard model is the tapered design. The roof disappears below inclined D-pillars, giving the effect of a longer, more sporting SUV.

Touches of nostalgia are weaved through the modern design. The blistered wheel arches for example. In a more modern touch, the light band connects two lamp units at the rear end, next to an illuminated e-tron logo.

The Audi Q4 Sportback e-tron Concept will contribute to Audi’s electrification plan. The German brand plans to offer more than 20 electric models by 2025. It hopes to cover every relevant market segment.