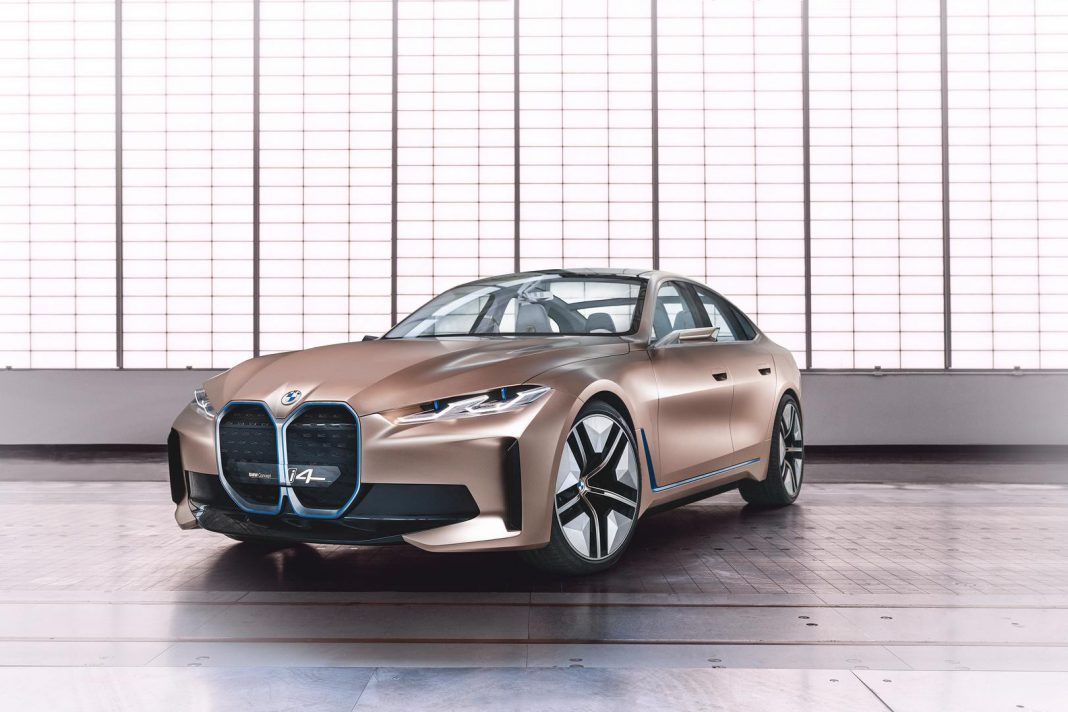 BMW’s bug release yesterday was the BMW Concept i4. The German giant presented a near-production concept version of what many expect to be the next addition to BMW’s growing ‘i’ range. BMW’s i3 and i8 models were trailblazers for the electric car segment. The i4 is, on the other hand, catching up with the competition.

BMW fans are sure to be upset by the addition of the controversial vertical grilles which we know are also coming to the BMW 4 Series. It seems clear that BMW are looking to pursue this design feature. Applying the grille to both the 4 Series and the i4.

Whatever your thoughts on the BMW Concept i4’s styling, there is no denying that it is an impressive machine. With a range of up to 600 km and an equivalent 530 hp, it should arrive with blistering pace. 100 km/h is dispatched in 4.0 seconds with a top speed in excess of 200 km/h.

The exterior paint is an interesting shade of Frozen Light Copper. The colour is also applied to the BMW Vision iNEXT. On the Concept i4, blue elements accent the front end, flanks and rear.

The kidney grille is blanked-off, there is little need for cooling in this electric car. Instead, it serves as an “intelligence panel” housing various sensors.

The Concept i4 also presents BMW’s new look logo for the first time. The two-dimensional and transparent badge on the BMW Concept i4 is completely redesigned. It isn’t yet clear whether this will filter down to the rest of the range or whether it will be the preserve of the BMW ‘i’ cars. 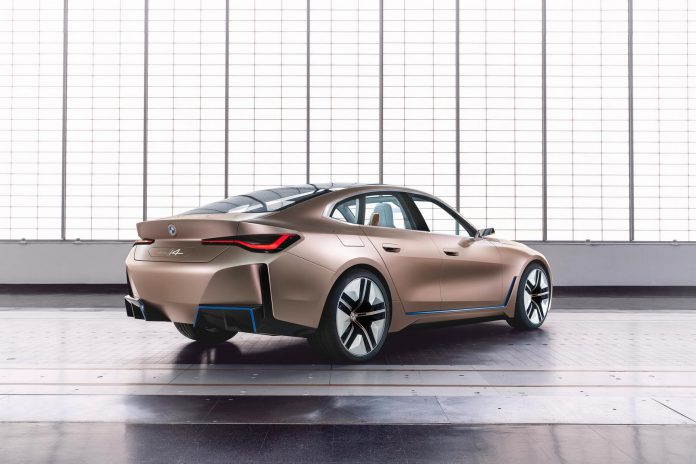 Inside, the BMW Curved Display blends the driver’s display with the infotainment screen. This exact display will be used in the production versions of the BMW iNEXT and BMW i4. Almost all of the functions are incorporated into it, such that BMW does away with conventional buttons. A central control panel replaces the gear lever with a toggle shifter.

The design of the interior blends accent strips in warm Gold Bronze with chrome. The surfaces are finished in microfibre and natural leather, tanned using olive leaf.

Three different modes define the user experience within the cockpit. “Core”, “Sport” and “Efficient” span everything from how the user experiences the display and graphics to how the interior is presented. Ambient lighting in the dashboard, doors and below the display indicate the technical adjustments. Hans Zimmer worked with BMW’s sound designer to develop the acoustic flavour of the BMW Concept i4.

Production of the new BMW i4 will begin in 2021 at the BMW Group’s main plant in Munich.