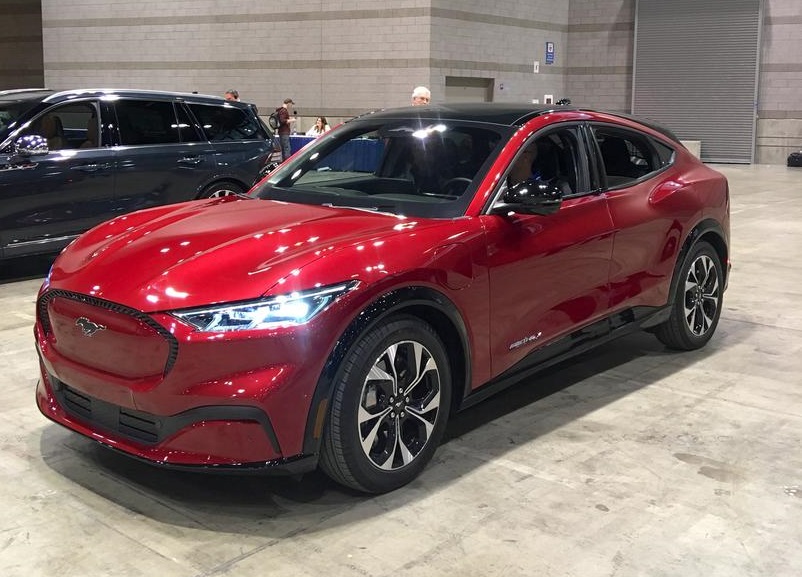 Chicago – At a special technology and concept event preceeding the 2020 Chicago Auto Show, Ford allowed journalists a close up look and a complimentary test ride in the upcoming Ford Mustang Mach-E pre-production prototype.

Introduced at the 2019 Los Angeles Auto Show last November, the Mustang Mach-E surprised and impressed a lot of journalists and consumers alike. The sporty SUV has seating for four plus a spacious cargo area out back.

First, a quick look at the acceleration of the new 2020 Ford Mach-E.

Available in either RWD or AWD, and offering either a normal battery pack or an extended-range battery pack, the car should achieve a range from between 210 miles to a theoretical 300 miles depending on which drive configuration and battery are selected.

When available, the Mach-E should come with approximately 330hp and 417 lb-ft of torque, which should deliver a 0-60 time of under 5 seconds. Two performance models are in the production pipeline also, the Mach-E GT should achieve 0-60 in under 4 seconds, and the GT Performance Edition is expected to make 460hp and a staggering 612 lb-ft.

The prototype looked great in person with clean aerodynamics and curvy, muscular-looking sheet metal. Inside, the seats were well-bolstered to hold you in place, but not so bolstered that getting in and out was difficult. A large tablet-like display features prominently in the center of the dash, much like a Tesla, but the Fords is larger and clearer to read. It was interesting to note that the Ford had something that Tesla’s seem to lack – soul. The Mach-E felt less like a soulless appliance and more like a comfortable and well-loved sweatshirt, the kind you want to slip into after work. If you catch my meaning.

Our drive was conducted inside the south wing of the McCormick Place Convention Center. The floor was polished concrete so it was slippery and an excellent test of the AWD Mach-E. The driver silently pulled out of the vehicle line-up, drove to the starting line and lined us up at one end of the large room. He stepped on the brake, then the gas, and released the brake.

The Mach-E’s wheels slipped for a second, then hooked up, and we went silently shooting down the length of the room as quickly as it could, the immense torque pushing us back into our seats. The traction control system and the AWD fought to find traction and succeeded. Our impression? It’s quick. REAL quick. There’s no doubt about that. Had the floor been rough concrete, I think the acceleration would have been much quicker but the fact that it accelerated as quickly as it did on the equivalent of ice was impressive.