While production of the Mercedes-Benz SLS AMG coupe and SLS AMG Roadster is inevitably coming to an end in place of a Porsche 911 fighter currently dubbed the 2016 Mercedes GT, the German automaker has one final upgrade for the outgoing model.

If that is the case, then this Mercedes-Benz SLS AMG Roadster will only be on the market for a few months before the car is officially axed just like the short lived 2013 Lamborghini Gallardo LP560-4. 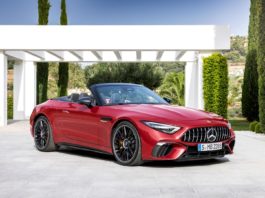