The Brits have showcased a Volcano Red Mclaren MP4-12C Spider in Detroit on Thursday at the official release in Woodward’s Vinsetta Garage. Next to the roofless car they reveal the price for the US market which is set at $265,750.

The release follows the official release of the Mclaren MP4-12C Spider at the 2012 Pebble Beach Concours d’Elegance. The McLaren MP4-12C Spider gets the same McLaren engineered monocoque chassis from the Coupe weighing just 75kg. It required no additional strengthening as the MP4-12C was originally designed as a convertible. The folding roof mechanism adds just 40kg of weight to the whole package and the hard top can be retracted at the touch of a button.

It takes just 17 seconds for the electronic mechanism to lower the roof into the area under the tonneau. This can be done at speeds up to 30km/h. The MP4-12C Spider also gets an electronically operated rear windscreen which acts as a wind deflector. This can be raised or lowered when the roof is raised to allow extra engine noise to enter the cabin. 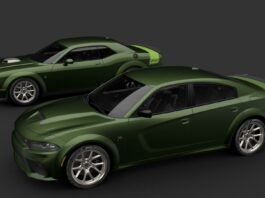