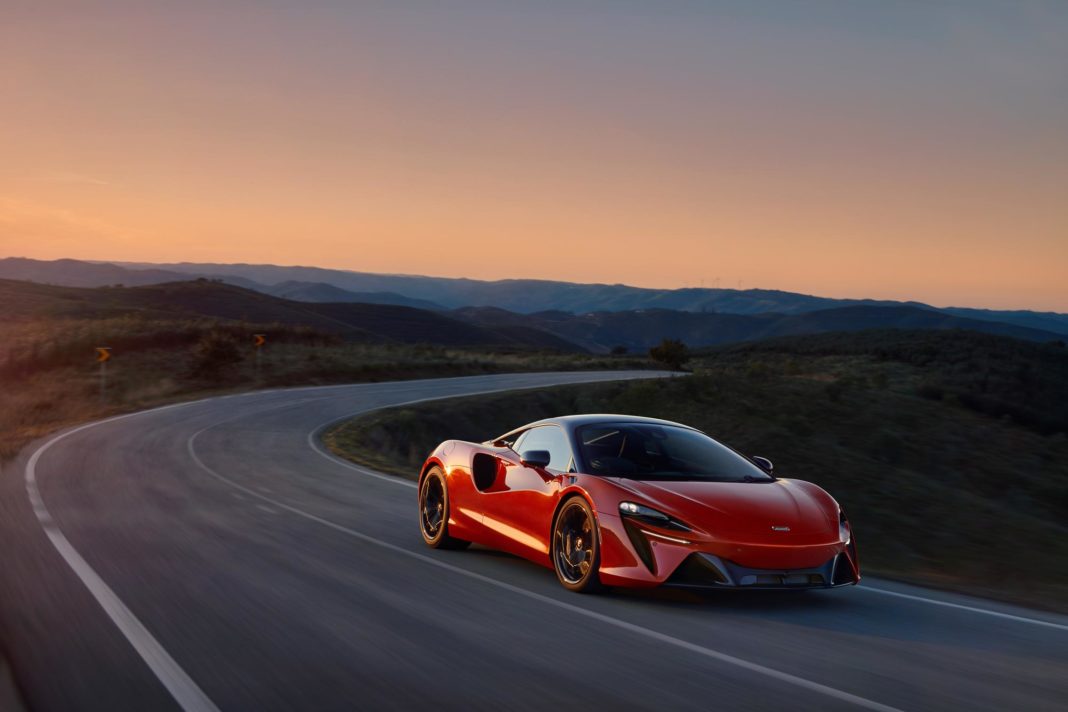 McLaren has finally revealed the performance numbers of their new hybrid supercar, the Artura.

The McLaren Artura is powered by a 3.0L V6 twin-turbo engine that generates 585hp and 585Nm of torque. This engine is 190mm shorter, 220mm narrower and 50kg lighter in weight compared to McLaren’s 4.0L V8 twin-turbo engine. The 120 degree twin-turbocharged M630 unit delivers unmatched performance and ensures compact packaging. A 180-degree angle was considered but dismissed because it raised the centre of gravity as well as the crankshaft.

The wide angle V6 cylinders allows the turbochargers to fit within the banks in a ‘hot vee’ configuration which ensures a less restrictive exhaust layout. The hybrid system is completed by an E-Motor that produces an extra 95hp and 225nm of torque, for a total of 680hp and 810nm of torque when combined with the ICE.

A 7.4kWh Five-module Lithium Ion energy dense battery pack provides an electric-only capability and is positioned low down behind the driver. The Artura has an electric range of 30km. This position optimises the centre of gravity, polar moment of inertia and also improves the dynamic agility of the car.

The Hybrid battery is fitted in a cooling manifold together with the new electric heating, air conditioning system and ventilation which are also used to control the air temperatures in the cabin. The batteries of the car are thermally controlled via dielectric oil, a technology used to maintain the E-motor at operating temperatures that delivers high performance.

The batteries take approximately 2.5hrs to charge from 0-80% when charged through EVSE socket and can never truly run out of power even when parked for a long period, the management also ensures that the battery units remain in peak conditions at all times. The battery unit comes with a warranty of years or 75,000km. An integrated power unit(IPU) acts as a DC/DC converter for the 12v system and minimises the weight.

The engine of the Artura powers the rear wheels through an eight-speed transmission that is designed for optimised packaging, the length of the gear cluster has been reduced by 40mm.

The driver can adjust the electric motor deployment to prioritise range, power or to shut off the internal combustion engine for a silent drive. Energy harvesting is enabled from the combustion engine and the battery can be charged from low to 80% within minutes under normal driving conditions which ensures that the driver can shift to electric-only mode.