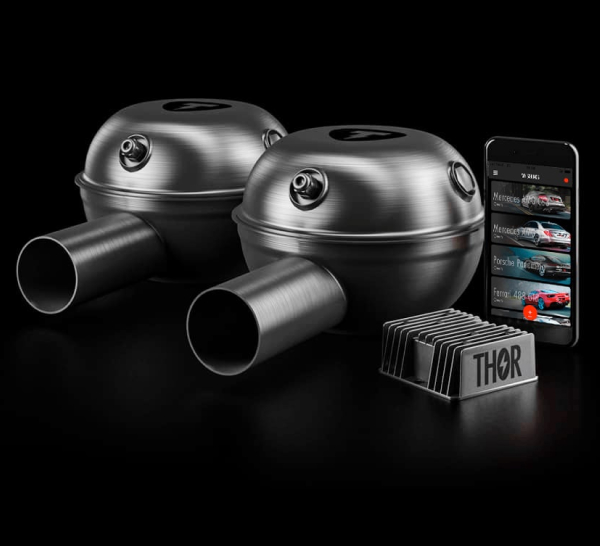 They are called Electronic exhaust systems and one opportunistic tuner has already started ripping the benefits of this fairly new aftermarket exhaust system. This type of exhaust system uses one or two loudspeakers enclosed in a metal sheet, the speakers are stored behind the rear bumper where you would normally find exhaust mufflers.

Thor Tuning is behind this new solution which is not only available for electric cars but gasoline and diesel cars as well. Sound engineers use live engines to program different sound variations of a particular engine into a mobile app. The driver can select a V8, V12 or V10 sound to play from the loudspeakers at the back. Variables such as start up, acceleration, deceleration and revs of the car will determine the intensity of the sound played by the loudspeakers.

Interesting times for sure, exhaust speakers are not entirely new but the evolution has been quite significant over the past few years. Car makers like VW introduced a similar concept in 2011 with the Soundaktor or sound actuator. This is a speaker placed between the engine and the cabin to play engine noises in the cabin. Modern cars have heavy sound proofing and one can hardly hear the engine or exhaust sound with windows shut, the soundaktor was introduced to solve this. It was however met with negative feedback due to its “fake” nature with most people opting to have them removed.

While their only major pollution is noise (when paired with EVs), exhaust loudspeakers are not for the typical purist who prefers a raw exhaust in true form. They will however gain more popularity among the new age car buyers, in reality, the thrill of the exhaust sound among sports cars has continuously declined as more cars adopt an “environmentally friendly” approach.