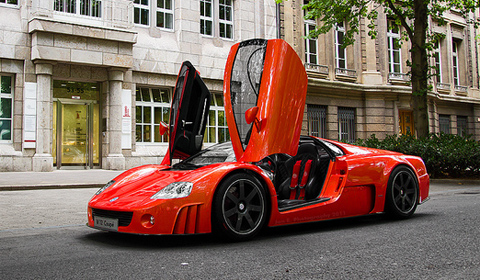 Volkswagen has debuted a wide range of concept cars over the years, some of the vehicles have made their way to the company’s lineup such as the VW ID.4 EV and CROZZ.

Magellan was built for outdoor travels in Spain 2002, the vehicle was designed as part car, part truck and part SUV. The Magellan was an all-wheel drive concept car fitted with a set of 19 inch wheels and an air suspension setup. The interior was spacious and could hold up to six passengers with the three rows of seats arranged in a 2x2x2 layout. The vehicle also featured a removable navigation system that could also be used for biking and hiking.

Scooter was a city vehicle developed in 1986, the model featured the bold 80’s style and was equipped with gull-wing doors and three-wheel front wheel drive. The Scooter weighs 635 kgs, the 40hp from the engine was delivered to the wheels through a four-speed manual box, the engine was mounted in the front part of the car.

5. VW Futura Concept: Back from the Future

Futura was presented in 1989 as an IRVW ‘Integrated Research Volkswagen’. The model featured innovative technology and was equipped with features and functions including distance sensors, parking and braking functions, on-board computer, navigation system and an electric parking brake. The Futura was fitted with doors that opened up instead of out and was powered by an engine delivering an output of 82 hp, an evaporation cooling system and a mechanical supercharger.

Italdesign Machimoto was developed in 1986 based on Golf GTi 16V platform, the model was a mixture between a motorcycle, a convertible and a family car and was spacious and could accommodate up to nine passengers. The prototype was powered by a Golf GTi 4- cylinder engine delivering 139 hp and passengers were advised to wear helmets while cruising.

The EcoRacer sports car concept debuted in 2005 at the Tokyo Motor show, the model was especially unique with the carbon fibre body elements and the diesel engine mounted in the middle of the frame. The engine produced 136hp and could do 0-62 mph in 6.3 seconds, the top speed was 142 mph. The driver could easily transform the vehicle from a coupe to a convertible by removing the hardtop and convert it to a speedster by removing the windscreen and frame.

The XL Sport concept car was built for eco-minded customers of XL1 in 2004, the model was a hyper-efficient sports car specifically designed for speed. The XL was powered by a powerful two-cylinder engine that could accelerate from 0-62mph in just 5.7 seconds and its wing doors resembled those of high-end sports cars.

The W12 Nardo was unveiled 1997 as W12 and later on re-introduced as Nardo in 2001, the vehicle was named after the famous Nardo test track in Italy. The model was equipped with a VW Syncro 4WD system and a 12-cylinder engine in a W-configuration. The engine delivered an output of 600hp, the W12 Nardo weighed 2646lbs and could accelerate from 0-60mph in 3.5 seconds. Unfortunately, the W12 was never produced but it helped the company establish a new type of engine.