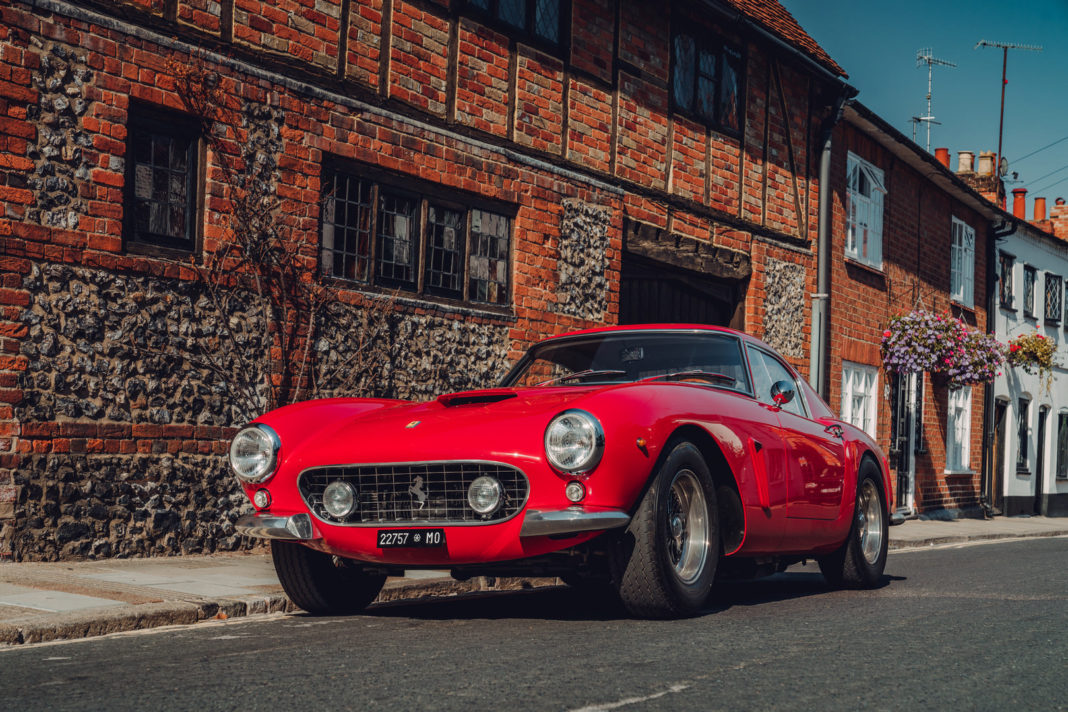 Purists be damned. There’s 3,000rpm on the Veglia rev counter in front of me, the national speed limit sign passes and I pin the accelerator to the floor. Under the bonnet there’s a new, 3.5-litre Columbo V12, built by Ferrari specialists, GTO Engineering, the three carbs pour fuel into those cylinders, there’s combustion, the glorious sound accompanying all that joined by an immediate leap in speed as 4,000, 5,000, 6,000 and 7,000rpm flash by.

The rev counter suggests 8,000rpm is possible but mindful that the car’s not mine, I press the clutch and palm the gearlever, enjoying the weight and precision as the lever moves across its gate. Twenty years I’ve been writing about cars, and today I’m in the one of the best cars I’ve driven.

I picked up the car I’m in from Twyford, England, from Ferrari specialists GTO Engineering. It’s a 250 SWB Revival, a car which, in the words of Mark Lyon, Managing Director of GTO Engineering is: “a ‘best of’, based on original drawings and knowledge, with an added usability, driveability and the option to make it as road or race-focused as you’d like.” A new 205 SWB, then, built with a donor Ferrari’s identity, yet entirely new. The first was built in 2010, but GTO Engineering has been restoring, re-building and maintaining every era of Ferrari, with a lot of focus though on the 250 models, for over 35 years.

Lyon explains how it came about: “we were restoring Ferraris, and there were lots of parts you couldn’t get, so we started making bits and before you know it you’ve got a parts department because you make more than you need.” That escalated, GTO making its own engines, with many original 250s running GTO Engineering Columbo V12s. The next step was to build an entire car. Thirty have been built so far, each taking between 12-18 months to build, and costing, around £850,000 – depending on the donor car and final specification. Like the cars they pay homage to, the 250 SWB Revival can be configurable to the owner’s wishes, be it a fast road car, a racer with papers, or anything in between and around. 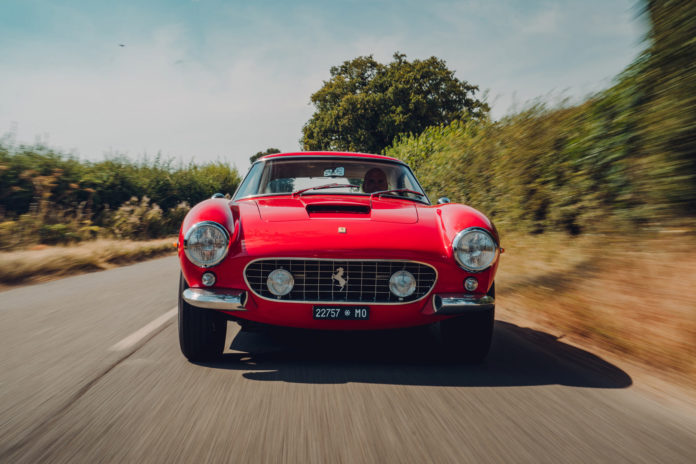 Many are bought by those with an original in the garage, the 250 SWB Revival being a car that can be used, with the value of the 60’s cars being anywhere between £6m for a steel-bodied example, to more than double that for an aluminium one with some race victories attributed to it. They’re at levels today that make them too precious to drive, which is why a 250 SWB Revival makes a lot of sense.

Not that I’ve an original squirreled away in my garage, but if I could I’d be buying one of these. Just look at it. Forget the gushing over its Jaguar E-Type contemporary, the 250 SWB is about as beautiful as a collection of metal, glass and rubber can be. It’s pretty but purposeful, there’s a lightness to it, but its proportions and detailing are absolutely spot on. Seeing one is enough to reduce me to a state of befuddlement, and holding the key to it, with the opportunity to drive… Goodness. 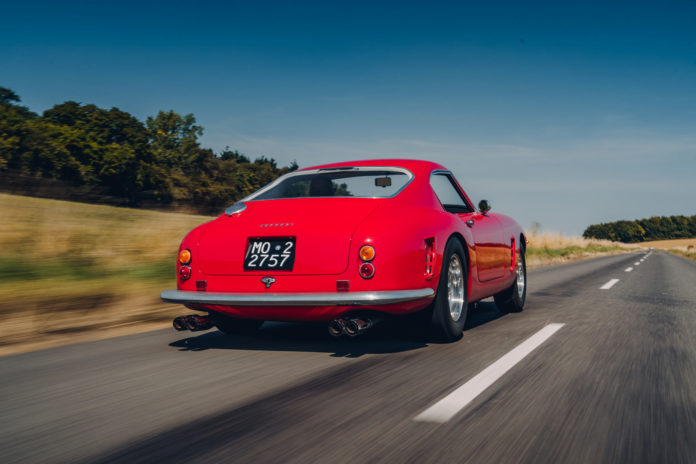 Everything is as it should be. From the satisfying metallic click as the door slams, to the way the springs on the seat cushion give to softly embrace, rather than grasp, you. The low seatback leaves your shoulders free, welcome on a day when it’s baking hot, the low back giving some room to manoeuvre the large steering wheel ahead. It’s a beautiful wooden-rimmed three-spoked alloy wheel, the tiny horn push with a Cavallino Rampante in its centre, the spokes being machined in their finish. It’s a tactile treat, the black dash ahead is simple, uncomplicated, with a pair of dials ahead, the speedometer reading 300km/h and the rev counter to its right up to 8,000rpm. The seat’s fixed in position, thankfully in a place that suits my frame, the pedals nicely spaced, the view out sensational. The car’s warm, after a prospective buyer’s had a run in it, so a glance to the oil and water temperature on the dials spanning the centre dash are right, as is the oil pressure, so I can turn the delicate key and drive it out without the necessary pre-amble of taking some time to allow everything to get up to temperature.

Turning that key has that engine fire after the briefest of whirs from the starter motor. It settles to an easy 900rpm idle, it a 3.5-litre V12 here, some 500cc more than the originals. GTO Engineering will build you one with the standard 3.0-litre capacity, this 3.5-litre optionally, or a 4.0-litre. Lyon describes the 3.5-litre as the sweet spot, it developing around 320bhp, it being tractable at low revs, but screaming like a racer when you’re above 3,000rpm. There’s none of the classic car apprehension here, either, no foibles to drive around, this is, after all, a new car. It might be built to old principles, but 60 years of development means there’s modernity where it’s sensible, with a USB port under the bonnet allowing the easy engine mapping, the addition of (optional, though you’d be mad not to have it) air conditioning, and a few other things like a charging port for your phone, should you need it. 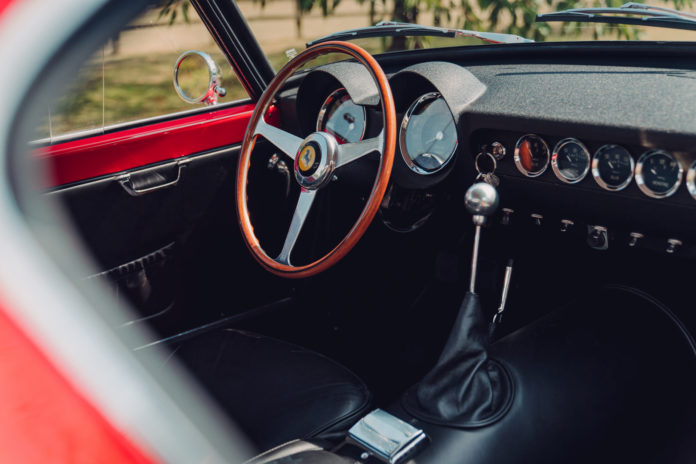 Not that you’ll see any of this, even the air conditioning is surreptitiously situated, its outlets blowing from behind you, so as not to sully the beautiful dashboard with vents. It’s all as authentic inside as it is outside, which means to all but the most knowledgeable of 250 SWB fanatics it’s as good as original. Better, really, which is praise indeed, after all, in period Sir Stirling Moss, who raced a 250 SWB in the early 60’s, described it as the ‘best GT car in the world.’ I’m not about to argue, even if with the passing of time things have inevitably moved on, though, as I’m often wont to say, not necessarily for the better.

Easing out into traffic, there’s no recalcitrance from it, the clutch isn’t light, but neither is it so heavy to make it a chore. That’s true of the steering, requiring a decent bit of heft at slow speeds – helped here by the wheel’s diameter and the fitting of a quicker ratio – but it lightens and eases at speed. There’s a bit of play off centre, a welcome slack that makes for easy cruising, which when worked through reveals a nose that’s eager to tuck in, and steering that’s rich in detail and feel. Every element of it is a sensory delight, with all the controls delivering the sort of direct communication that’s long been lost to the muting passage of modernity, the 250 SWB Revival a glorious reminder of the joy of the physicality of driving, the reward of getting back as much as you put in. More here, even. 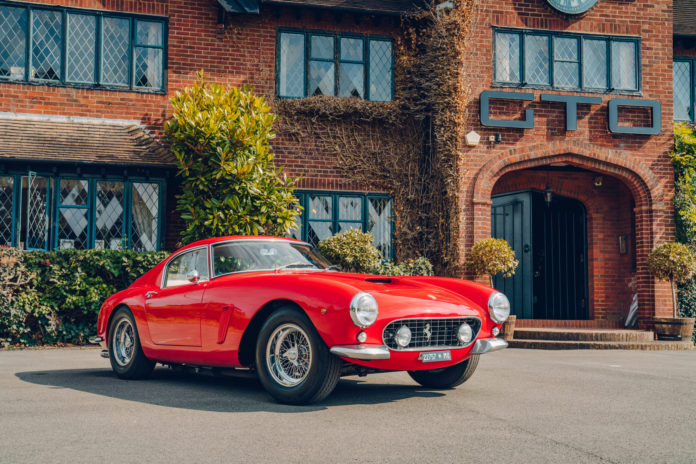 The engine is an absolute masterpiece, its tractability and civility at town speeds genuinely surprising, my expectation being that the 250 SWB Revival would be a weighty, difficult machine in modern traffic, only to be briefly enjoyed in the briefest of sprints between the villages and towns that punctuate my drive. It’s not, yet for all that ease it’s duality is obvious when you escape the confines of civilisation, and head out onto the UK’s A and B road network, which meander, rise and fall with a lazy submission to the landscape around them rather than pummelling through it, with the correspondingly amusing, enjoyable topography being the happy result.

The 250 SWB Revival is in its element here. There’s masses of grip and traction, though I’m mindful of Lyon’s statement when visiting GTO Engineering’s engine room that the Columbo can spin up the tyres in third. Hardly surprising given it’s only tasked with about a tonne to shift, though at no point is it unruly, even when pushing it hard. The suspension rides with a beautiful fluidity, and with your backside low and near the wheels doing the powering you’ve always an idea of what’s going on. The brakes, discs here, a first in a Ferrari back in the day, offering stopping power that’s nicely matched to the performance, so there’s no eye-widening moments when you arrive at a corner a little bit too quickly here, then.

The brake pedal needs a decent shove to slow it, but slow it it will, the firmness of the pedal such that it’s the perfect platform to roll off to allow a blip of the throttle for a down change. Doing so allows the engine to partake in the slowing process and giving a wonderful aural bark as accompaniment. The gearshift itself is wonderful in its feel, it being mechanical, the long stick unusually so in a world accustomed today to stubby levers, or more likely, paddles, yet the action so pleasingly easy, natural, and perfectly weighted that you just revel in it. The result is you end up accelerating harder to reach the next corner, just so you can lean on those brakes, blip that throttle and work back down the gearbox as quickly as you worked your way up it. 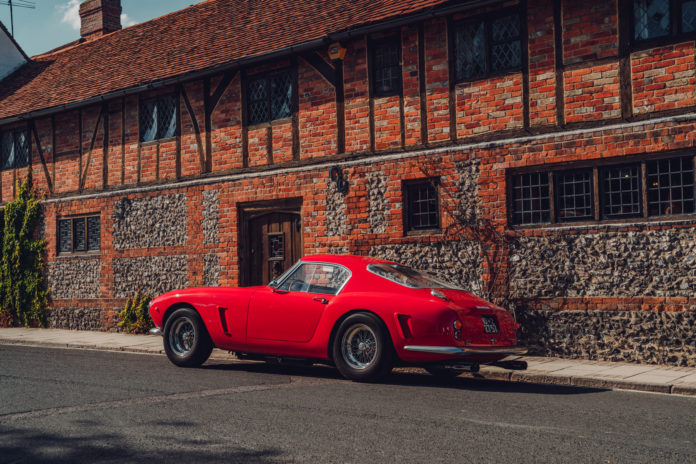 It’s not just an engaging, enjoyable, involving drive, it’s a life-affirming one, a drive so immersive, joyful and rewarding, and all possible at speeds that, with the odd concession, are all sensible, and, crucially, legal. If you want a reminder of why you loved cars, and driving, the 250 SWB Revival is it, without the classic compromises, or the outrageous cost of an original. Yes, its price puts it out of the reach of all but a small, dedicated minority, and some of the more vociferous ‘purists’ might balk at its revival status, but it, and what it represents should absolutely be celebrated. A true super car that’s way more enjoyable and exploitable than any of the modern small-build number, too much performance, be-winged super and hypercars that litter our social media feeds, if not our streets. This a properly special car, demanding of you but rewarding like nothing else, indeed, if driving really matters to you, then this really is as good as it gets.