Vivid Racing has just announced its plans to create a unique 2013 SRT Viper set to debut at the SEMA 2013 auto show later this year.

The 2013 SRT Viper by Vivid Racing is unlikely to undergo any performance upgrades, with the American company confirming it’s simply accessorizing the high-end American supercar for SEMA 2013. What this entails we’re not too sure, but we’ll certainly find out when SEMA 2013 kicks off in early November this year!

The SRT Viper gets an 8.4 liter V10 unit producing 640bhp and 600lb-ft of torque. It has the most torque of any naturally aspirated engine in the world. It also gets a lightweight composite intake manifold, high-strength forged pistons, sodium-filled exhaust valves, new catalysts to reduce back pressure and an aluminum flywheel that reduces reciprocating losses. Altogether, a 25 pound weight loss over the previous model.

The 2013 SRT Viper receives a re-engineered version of the Tremec six-speed manual found in the previous generation viper. Modifications include a shorter throw shifter, closer gear ratios and a final drive ratio that has been shortened to 3.55 from 3.07.

Four-piston Brembo brakes with fixed-aluminum calipers, and vented rotors with a diameter of 355mm by 32mm, are used at all four corners. StopTech units are available through an SRT Track Package. Bi-xenon projector headlamps have been fitted alongside daytime running lights. 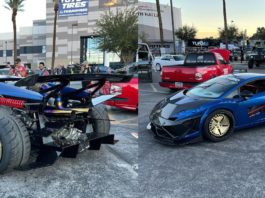