The Tokyo Auto Salon has been with us for 30 years now and is one of the most influential car shows of not only in the Asian continent but outside its boundaries too. For the first time in 30 years, the Auto Salon took place in Singapore, an island city-state off the southern tip of the Malay Peninsula. This is the Tokyo Auto Salon Singapore 2013.

Thankfully, our friend and photographer Fidoklik flew all the way from Indonesia to Singapore for the inaugural event. It was supported by the Tokyo Auto Salon Association (TASA) of Japan, alongside Singapore’s leading media company MediaCorp and Muse Group. The venue was at the Marina Bay Sands Expo and Convention Centre, from April 12-14.

This is a gallery of the Nissan GT-Rs that were in the show and as you can see, they appear to be heavily modified at least on the cosmetics side, and knowing well that the Japanese tuning scene is wild, with tuners like Veilside and Wald International, then we are not surprised by the excellent works. Some of the works on the GT-Rs included one that was heavily covered with carbon fiber, Autovox had theirs fitted with HRE Wheels and Akrapovic exhaust system, Varis had a white GT-R and so much more! 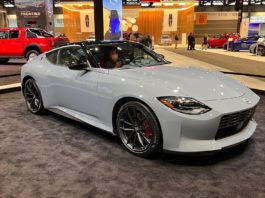