Ever since its inception back in the early 1960’s, the Ferrari 250 GTO has always been one of the world’s most desirable cars with a handful of 250 GTO’s have been sold for well over $20 million in recent years. In fact, one recently sold for $35 million back in June, making it the most expensive transaction ever involving a car.

However, if the list price of a 1962 Ferrari 250 GTO Series I finished in red is met, then it’s set to become the most expensive GTO ever sold. Currently listed at $41 million on Anamera, the site promises that this car has been very well cared for in the past, is in exceptional condition and one of the finest 250 GTO’s in the world.

The car is up for sale by Ed Classics in the United Kingdom, and is left-hand drive, manual and features a completely blacked out interior.

At the moment it seems as though this particular 250 GTO will be sold privately, rather than at an open auction, meaning that a selling price is unlikely to ever be known if the car does indeed sell.

Just 36 Series I cars were ever built, making it one of the rarest supercars ever produced and features a 3.0 liter V12 engine producing 300hp and a five-speed manual transmission. 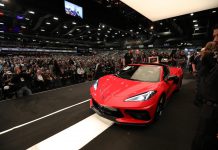